BY HRAYR ATTARIAN
October 7, 2017
Sign in to view read count 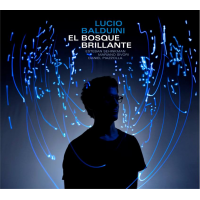 Argentinian guitarist Lucio Balduini creates a mystical and dramatic ambience on his third release as a leader, the intriguing, El Bosque Brillante. Each of the 11 tracks that comprise the album are abstract soundscapes evoking specific moods and emotions.

"Cascada Milagrosa" for instance opens with Balduini's melancholic and contemplative melody that flows elegantly over drummer Daniel Piazzola's atmospherically splashing cymbals. The band alternates ardent sinewy group play with gentler, more fluid guitar driven refrains. This is one of the few tunes on the disc that showcases an instrumental embellishment of the main theme.

Most of the other tracks are masterfully executed but are short on spontaneity. Balduini and keyboardist Esteban Sehinkman create the ethereal feeling on the cinematic "En Busca A la Tierra Sin Mal" by alternating resonant, short vamps. Piazzola and bassist Mariano Sivori rumble expectantly in the backdrop.

Sivori's muscular bass forms the rhythmic focal point of such pieces as the otherworldly "Superestrella." Sehinkman brings a folkish touch to the music as his percussive chords meld with Balduini's yearning strums. Piazzola drives the band with his galloping beats.

Piazzola's thundering kit is featured on the tense "Piedra Lunar" that has a wistful nocturnesque edge. The quartet mesmerizes with recurrent echoes of crystalline motifs within which Balduini weaves his forlorn, tender solo.

Although Balduini composed most of the songs on the recording he does also cover a couple by pioneering Argentinian rock musician Luis Alberto Spinetta. "La Rifa del Viento" for instance, has a loose, swinging cadence that Sivori and Piazzola provide. Utilizing silent pauses deftly and to haunting effect and adding bluesy hints, Balduini not only interprets Spinetta's work he transforms into an elegy to the late guitarist and singer.

Although it lacks improvisational rigor El Bosque Brillante is a captivating and charismatic disc that enchants with its hypnotic dream like lyricism. Balduini demonstrates that he has a style of his own that successfully crosses genres and manages to remain refreshingly original.