By Jakob Baekgaard
October 7, 2017
Sign in to view read count 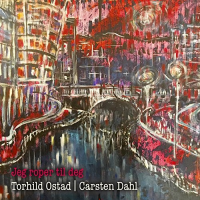 Back in 1982, the Norwegian singer, Radka Toneff, released a very special duo album with the American pianist, Steve Dobrogosz, called Fairytales. Since then, the fate of the music has also become something of a fairytale, with the album being chosen as one of the best Norwegian albums of all time.

It seems almost impossible that someone would once again reach the heights of that iconic Norwegian album, but out of nowhere comes Jeg roper til deg, a collaboration between Norwegian singer, Torhild Ostad, and the Danish pianist, Carsten Dahl.

In some ways, the two artists are very different. Ostad has been a hermit in terms of releasing records. Her last album was her acclaimed debut, the a cappella album, Blomar i moll, which was released in 1996. Dahl, on the other hand, is one of the most prolific artists on the Danish scene. He has released a string of albums and his solo piano recitals and music with the Carsten Dahl Experience are among the jewels of Danish jazz. Dahl has sometimes been compared to Keith Jarrett, one of his influences. Like Jarrett, Dahl can dive deep into the wells of music and come up with perfectly structured lines that occasionally resemble another great influence, J.S. Bach.

These two unlikely soulmates, the taciturn Ostad and the communicative Dahl, have found each other in a poetic dialogue that sparkles with inspiration and timeless beauty.

The album itself is a call for communication and spiritual redemption. The cover painting is an expressionistic depiction of a bridge and recalls the famous painting The Scream by the Norwegian painter, Edvard Munch. However, where Munch's painting portrays a state of anxiety with the world closing in on the person that is standing on the bridge, the cover of Jeg roper til deg shows the bridge at a distance with possible silhouettes of people and the title means "I cry for you." In other words, this is not a nihilistic scream of desperation, but rather the lonely cry for consolation.

The spiritual tone is underlined by the gentle flow of music that draws on psalms, folksongs, lullabies and jazz ballads. Ostad sounds like an ancient voice from the mountains and her cry is punctuated and complemented by the accompaniment from Dahl whose register embraces deep, dark chords, vibrating strings, arabesque motifs and clear, crystalline figures. One of his compositions on the album is called "Lyset fra mørket" (The Light from Darkness) and the paradox of a light that comes from the dark is the key to understanding this album.

Jeg roper til deg is an outstanding collection of soothing hymns and a highlight, not only in the discographies of Ostad and Dahl, but an album that could be a potential Scandinavian classic. Anyone who has been enchanted by Toneff should also give this album a chance.