A Fireside Chat with Chick Corea

By AAJ STAFF
September 7, 2004
Sign in to view read count

The song titles are a descriptive. It is a particular way of looking at the world or looking at an environment or a situation and depicting it in music.

Individual virtuosity has not forsaken jazz. It is just rarely covered in the mainstream media and is often overwhelmed by the fabricated plastic of pop culture. But I dare hope. Study Chick Corea. Consider his productivity. And admire his artistry. Miles Davis' Bitches Brew , Circle's Paris Concert , Return to Forever's Romantic Warrior, weighed with his extensive achievements for Atlantic, Blue Note, Polydor, ECM, and Concord/Stretch and Corea is beyond question a creative institution. Hope remains.

All About Jazz: What prompted the Elektric Band reunion?

Chick Corea: It happened midway through 2002. I had a birthday party at the end of 2001, a sixtieth birthday party. We held it at the Blue Note in New York and I invited a lot of musician friends down and it ended up lasting three weeks. It was a real moving experience for me to be able to meet with so many of my friends, who I worked with in my past bands. Michael Brecker was there, Steve Gadd, and Eddie Gomez, and Bobby McFerrin, and Gonzalo Rubalcaba, Roy Haynes, Gary Burton. There were so many people, it was very nice. But we weren't able to do any electric music because the nature of the small club and the equipment of the production. So when the next year came around, I decided that I really wanted to try and put the Elektric Band back together. We had this one gig at the Hollywood Bowl in the summer of 2002. They asked me to bring some of my bands, so I brought three quartets with Michael Brecker, Steve Gadd, and Eddie Gomez. We reunited Airto Moreira and Flora Purim and Stanley Clarke that night. Gary Burton came and we did a duet. That was the first night that the Elektric Band played and it was such a good feeling, everyone was so excited and played so great that we agreed to try and do more things with the band.

AAJ: Is the Elektric Band an extension of In a Silent Way/Bitches Brew Miles and Return to Forever?

AAJ: The Elektric Band's To the Stars is based on the fiction work of L. Ron Hubbard.

CC: It's a tone poem and is inspired by the book. Of course, I've been a fan of L. Ron Hubbard's fiction work for maybe 20 years. He's one of my favorite writers, if not my favorite writer. But I have never attempted to put any music to his literature. This particular story happened to be a favorite of mine. I read it many, many times and I just began to hear music and get a flow going with it. So I made an experiment of writing a piece to the description of the spaceship captain's piano playing. The spaceship captain in this story is a pianist. He appears once in the whole story playing the piano. Hubbard's description of his piano playing is very captivating. So I tried to write a piece and it flowed nicely and I just kept writing music to depict it. I do well when I have inspiring text like that to work with.

AAJ: Not all text lends itself to musical interpretation.

CC: Well, it's a collaboration. It is like a portrait. I've written a lot of music where the song is the thing and the melody is the thing. Somewhere along the process of writing music, I usually, even if it is only to give the piece a name, I usually get into some kind of idea of giving a face to the music. For instance, the song "Spain," it is about Spain and so I called it "Spain." So all of the sudden it has a significance beyond the melody. In other words, it wasn't called "Keyboard Piece No. 33." The song titles are a descriptive. It is a particular way of looking at the world or looking at an environment or a situation and depicting it in music. I find it to be a very natural process. I've done it a lot and I feel comfortable with it. For instance, I think back to some of the recordings I did in the '70s. The Leprechaun , for instance, is a tone poem that describes the sprites and magic spirits of the forest. Then there is My Spanish Heart , which is all songs about my feeling for Latin music and Spanish speaking communities and flamenco music. Then there was The Mad Hatter, which was depicting characters in Alice in Wonderland. It is something that inspires me. I like to write music that way. So this particular project is real special because of the incredible inspiration of L. Ron Hubbard's writing and life on me. So to be able to make music with his great literature has been a real joy.

AAJ: Did Miles also shape your altruism as a leader?

CC: My music life really starts with my love to compose music. As a performer, I always see myself as a pianist and my other musician friends as the ones who realize the music. The compositions are created out of nothing. You make the game. You work out what you want to create and build. You start with a blank slate and you create it. My musicians are always incredibly important to the message and that's what I love. I love to have a group that really plays together like a group, where each individual in the group can be very powerful and strong and be themselves and play great.

AAJ: But even a spaceship captain/pianist finds solace.

CC: I find it most relaxing, to tell you the truth, when I'm working hard because I love what I do. When I can get it going smoothly and I get the concerts going well and all the details are together and the musicians are doing fine and we're making people happy and they're smiling, all of the logistics are pulled together, this is a big challenge and I love it. I love to just continue to do it and do it. I do take my time with my family, with my wife, but this is what I love to do.

CC: (Laughing) I saw some photos of Dragon*Con and it's pretty wild. It should be fun. 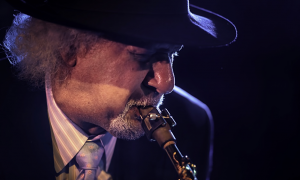