It's about searching for self, searching for what it is the music means to you, and what's the best way for you to express yourself in the music and as a human being.
—Steve Swell

These lines, the opening stanza to trombonist Steve Swell's poem "Transitions", distill the essence of his professional career. In three decades, Swell has traveled many roads and been faced with many decisions.

From his early days in "show bands" touring Broadway productions and working with jazz legends Buddy Rich and Lionel Hampton to his migration into the creative improvised music scene performing with drummer Joey Baron and saxophonist Tim Berne, Swell made choices. Some were easy and instinctive; others required deliberate introspection. Now approaching 50, he has turned down another path to develop as an artist.

"It's time for me to really get to the next level of maturity for myself and my music," Swell says. "As I get older it's more about the music and honing that craft and developing myself as a person and as a musician." For Swell, this evolution requires a simplification, winnowing his many projects to concentrate on two or three steady bands.

After releasing strong CDs in late 2003, he is well on his way. Still in Movement (CIMP 2003), the latest from his New York Brasswood Trio, featured Swell's loose compositions and confident, dynamic playing that was careful not to overpower the session. His Suite For Players, Listeners, and Other Dreamers (CIMP 2003) convened a sextet including trumpeter Roy Campbell, saxophonist Will Connell, and violinist Charlie Burnham. Swell wrote an interconnected composition in several movements for the wider sonic palate offered by the diverse instrumentation.

The two projects show related, but different, sides of his musical personality, which has grown to absorb the influences of his varied playing history. Music started early for the New Jersey native, who was introduced to the trombone—the only instrument available—in an elementary school music program. When Swell was ten, his father (a saxophonist/clarinetist) played big band records to distract him from watching the Beatles on the Ed Sullivan Show. "What he was trying to save me from, I still don't know," Swell jokes.

It was a fortuitous confluence for Swell, who continued listening to jazz throughout high school, as he played in school concert and stage bands. After a year of college, 19-year-old Swell auditioned for a show band in New York City, got the gig, and promptly moved there. Throughout the '70s and '80s, he played in touring shows and on Broadway, including in a production of Bob Fosse's Dancing. Swell was "jobbing" and proud of supporting himself exclusively as a musician.

But he faced a dilemma. Although he was working steadily, the gigs were making him crazy and taking him further away from what attracted him to music. In 1985, he played a gig at Carnegie Hall with multi-instrumentalist Makanda Ken McIntyre, who asked Swell if he wanted to make music or money. Soon after, he stopped taking every gig he was offered and focused on playing creative music.

"It's about searching for self, searching for what it is the music means to you, and what's the best way for you to express yourself in the music and as a human being," Swell says. Turning down paying gigs, he supported himself waiting tables, driving taxis, and proofreading texts. He then got involved in the burgeoning scene at the old Knitting Factory, of which he had been unaware. Playing with Baron's unusual Barondown trio with saxophonist Ellery Eskelin, and Berne's Caos Totale, which included stalwarts like bassist Mark Dresser, trumpeter Herb Robertson, and drummer Bobby Previte, Swell found creative synergy.

"You want to be doing the music that is of your generation," Swell says. "In jazz there is so much going on, all the influences can be brought in. If you put it together right, you can have a hell of an interesting band and some interesting music." It was a natural fit for Swell, who could draw on the skills and technique developed as a "jobbing" musician and utilize them for a personal statement. He realized, "Oh yeah, this was the reason I was playing music to begin with."

Absorbed in creative music, Swell developed and led his own projects as a composer. To date, as a leader or co-leader, he has released about fifteen recordings. With influences that include trombonists Roswell Rudd and Jimmy Cleveland and composers like Jimmy Lyons, Ornette Coleman, and Braxton, Swell pushed himself creatively. "My writing is most successful when it organically leads into the improvising and back again. That's not only a matter of writing; it's also a matter of playing a lot together," he says. 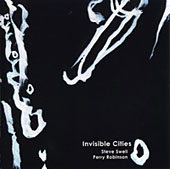 Swell tends to work with the same musicians to build a dialogue and draw from a shared history. One such artist is drummer Kevin Norton, who played with Swell in Johnston's group, on Swell's Suite , and in duo. "I really relate to what he's trying to do," Norton says, noting Swell brings a compositional sense and energy reminiscent of music from the '70s, but "putting it together in a different way."

Slammin' the Infinite , a forthcoming release due by year's end on Cadence, exudes intensity. The group pairs him and frequent collaborator saxophonist Sabir Mateen with the rhythm team of bassist Matt Heyner and drummer Klaus Kugel. Mateen, who also includes Swell in his band, finds Swell's rhythm, melodic phrasing, and sonic range inspirational. "I always get an uplifting experience playing with Steve. He's like the boost in my band," Mateen says.

Another ongoing project is Blue Collar, with trumpeter Nate Wooley and percussionist Tatsuya Nakatani, which explores the textural, using sounds and vibrations for improvisation. Conversely, the new Fire Into Music quartet with Parker, saxophonist Jemeel Moondoc, and drummer Hamid Drake is freewheeling and incendiary. The group will be touring throughout the US and Canada this September. After that, Swell will be touring Europe with saxophonist Gebhard Ullman's new group that also includes saxophonist Tony Malaby, bassist Drew Gress, and drummer Gerry Hemingway.

Despite his intention to focus on specific projects, expect to find Swell improvising with others—this month with saxophonist Briggan Krauss and drummer Dee Pop. "The older I get, the more I realize what a wonderful opportunity it's been for me to play music, to be out in front of people," he says. In early 2005, Swell will also get the opportunity to combine his passions for poetry and music during a program at Merkin Hall, which will feature his texts, set to his music.

"I'm just going to follow what my instincts tell me to do in the music," Swell considers. "I pretty much have done that all along, and I'll see where it takes me."

Visit Steve Swell on the web.