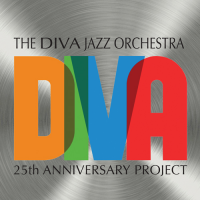 To mark the DIVA Jazz Orchestra's twenty-fifth year as one of the world's leading jazz ensembles—male or female—drummer / music director Sherrie Maricle gave herself and eight members of the all-woman orchestra a homework assignment: to compose and arrange each of the ten numbers on the group's eleventh CD, the bright and exhilarating 25th Anniversary Project.

Now that the task has been completed and the grades compiled, it should come as no surprise that everyone's work—not to mention the orchestra's typically superlative performance—has earned a well-deserved A-plus, from baritone saxophonist Leigh Pilzer's loping entrée, "East Coast Andy" (reminiscent of Neal Hefti's familiar theme from The Odd Couple) to Maricle's closing numbers, "Always in My Heart" and "The Rhythm Changes."

Sandwiched between them are emphatically engaging tunes by saxophonists Janelle Reichman ("Middleground") and Alexa Tarantino ("Square One"), trombonists Sara Jacovino ("Darkness of the Matter") and Jennifer Krupa ("A Quarter Past the Last Minute"), bassist Noriko Ueda ("Seesaw"), trumpeter Barbara Laronga ("Jami's Tune") and pianist Tomoko Ohno ("La Americana"). Maricle's gift for finding and recruiting the best "sidepersons" within reach is well known; what wasn't as apparent until now is that a number of them are among the most accomplished big-band composers and arrangers on the scene. And as the liner notes (shared by every member of the fifteen-piece orchestra) attest, they are talented writers as well.

Without delving too far into specifics, suffice to say that the music herein mirrors the unquenchable spirit and close camaraderie that has been emblematic of DIVA's persona since it was founded in 1992 by Maricle and the late Stanley Kay. To put it another way, no member of the orchestra stands above or apart from the others, even Maricle, who is content to hunker down and drive the band unsparingly as any adherent of Buddy Rich would (she solos only twice, on the Latin-centered "La Americana" and her own "Rhythm Changes"). Even so, Maricle has a heavy workload, as do Ueda and Ohno, as several numbers are explicitly power-laden and cadence-oriented (including the frisky "Rhythm Changes").

Speaking of solos, almost everyone in the ensemble is given at least one shot, and no one lands short of the mark. Pilzer and trumpeter Jami Dauber are awesome on "East Coast Andy," Ohno and Reichman (clarinet) no less so on the sinuous "Middleground." Tarantino (soprano) and Ohno form an irrepressible twosome on the pliant "Seesaw," as do trumpeters Laronga and Liesl Whitaker on the playful, trad-and barrelhouse-driven "Jami's Tune." Tarantino and flugelhornist Rachel Therrien excel on the debonair "Square One." Jacovino and tenor Erica von Kleist share center stage on Jacovino's esssentially translucent "Darkness of the Matter," Ohno, Reichman, Maricle and guest conguero Marcia Gallas shine on "La Americana," while Dauber (muted), Krupa and von Kleist stand out on Krupa's charming "A Quarter Past the Last Minute" (which evinces a modest similarity to Gershwin's "Summertime"). Therrien, Ueda and Ohno return on the ballad "Forever in My Heart" before Laronga, Ueda, Maricle and alto Mercedes Beckman amp up the afterburners and ring down the curtain on "The Rhythm Changes."

While twenty-five years seems a fairly long time by any measure, when reckoned in big-band years it's more akin to several lifetimes. That Maricle and DIVA have managed to survive and flourish for two and one-half decades is as remarkable as it is heartwarming. As for the future, Therrien sums it up splendidly in the liner notes: "Cheers to the next twenty-five years of the DIVA Jazz Orchesta!" As does Ohno, declaring simply "Viva DIVA!" May we now have a full-throated "amen"?

East Coast Andy; Middleground; See Saw; Jami’s Tune; Square One; Darkness of the Matter; Jacovino; La Americana; A Quarter Past the Last Minute; Forever in My Heart; The Rhythm Changes.