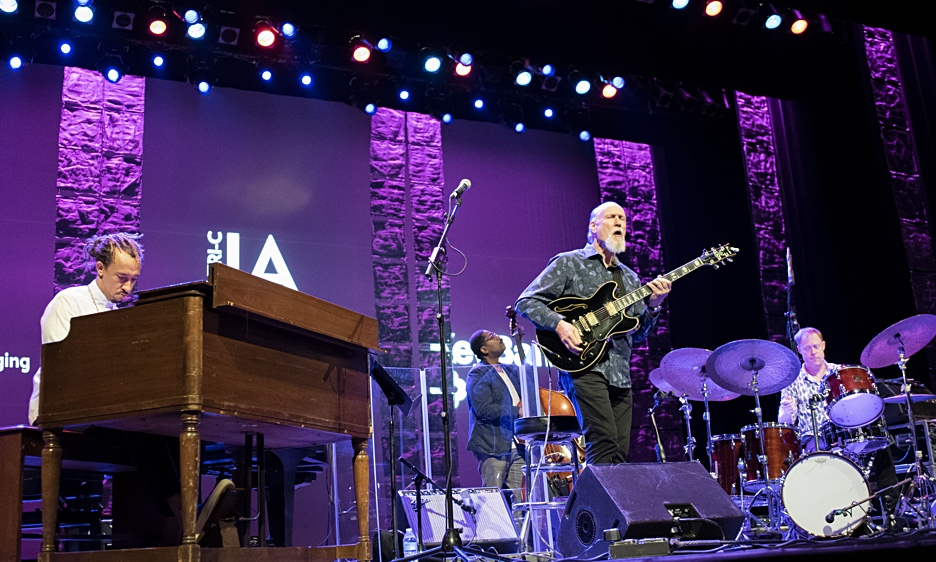 The year was 1979. Mainstream styles were on the wane and the major labels had largely abandoned jazz product, with the invention of the compact disc some three years in the future. The musical landscape in terms of jazz was nothing like the global commodity it is today. There was no internet and print media and word of mouth were the main avenues for dabbling into the rich history of jazz. Keeping all this in mind, it was surely a risky endeavor for educator Thom Horning to convince the powers-to-be at Cuyahoga Community College to tackle the presentation of an annual jazz festival. Yet, this is exactly what happened 40 years ago and the rest is history.

With the catchphrase "40 and Still Swinging," this year's festival continued its run at Playhouse Square. Five years ago the festivities jumped ship from the college campus and moved up on the calendar from April to June. Things have really not been the same since. With free performances happening on an outdoor stage while multiple ticketed events occur daily, there are certainly many options for those in attendance, perhaps too many. As for the idea that everything is still swinging, such is not always the case. The increase in smooth jazz and crossover artists has been considerable lately, suggesting that the festival has possibly outgrown its "jazz" moniker.

As an opening night gambit in celebration of their 40th anniversary, the band Tower of Power seemed somewhat of an odd choice. Nonetheless, the ten-piece ensemble had no problem bringing the party with them following the opening dedications and announcements. While several pieces from the band's recent Soul Side of Town palled in comparison with such classics as "What Is Hip?" and "This Time It's Real," vocalist Marcus Scott managed to put an updated vibe on all the material having joined the band in 2016.

Between getting up close with the audience and rocking it out with leader Emilio Castillo, tenor saxophonist Tom Politzer, and guitarist Jerry Cortez, Scott was a man in constant motion. Taking his time on "Willing to Learn," Scott's banter extended the piece beyond what was probably needed, although trumpeter Adolfo Acosta's beautifully articulated solo more than made up for the histrionics. With drummer David Garibaldi and bassist Marc Van Wagenungen laying down the slickest groove around, "Souled Out" was a potent encore that literally brought everyone to their dancing feet.

The rest of the weekend was a wide-ranging landscape of various genres with several ticketed shows happening over the course of each day. The only celebration of a native Cleveland jazz legend was offered by John Clayton and the Clayton-Hamilton Jazz Orchestra as they tipped their hat to pianist and composer Tadd Dameron. A highlight of the set, Clayton's commissioned work entitled "Just a Tadd Bit" would make its debut. Written in three parts, there was ample room to appreciate drummer Jeff Hamilton's stellar brush work along with an exquisite bowed passage by Clayton himself, who managed a sly quote of Dameron's "If You Could See Me Now."

The bassist also waxed poetic on a surprising and gentle reworking of Billy Joel's "And So It Goes." As singer Dianne Reeves took the stage, the focus shifted to another Cleveland native, composer Henry Mancini. "Days of Wine and Roses" and "Moon River" also offered up cameo spots from trumpeter Dominick Farinacci and pianist Gerald Clayton, although their statements took a backseat to the overall mood conjured by Reeves and the big band.

His latest ensemble incarnation, Combo 66, proved to be a real keeper for guitarist John Scofield during his mid evening set on Friday. Coming up with a prodigious mixture of tunes from his vast catalog, Scofield seemed to take on the role of a snake charmer as he summoned the best from contributors Gerald Clayton on piano and organ, bassist Vicente Archer and drum veteran Bill Stewart.

From the popular A Go Go, Scofield brought out "Green Tea," with Stewart's agile drumming giving the overall feel a sense of fluidity lacking in the original. The drummer also pulled out the stops for the fiercely swinging "Icons at the Fair," the interaction between him and the guitarist the type of thing that makes Stewart such an asset to any Scofield band. It was also great to hear Clayton's touch on the B3 organ as matched with his usual flair and masterful improvisations. Made famous by George Jones, the closing "Just a Girl I Used to Know" found Scofield reciting the lyrics aloud before allowing his guitar to do the rest of the talking.

The late show on Friday featured Japanese native Akiko Tsuruga in a trio with drummer Jeff Hamilton and guitarist Graham Dechter. "Amen" breaks ushered in a serious shuffle groove on Hank Mobley's "A Baptist Beat." The aptly-titled "Orange Coals" kept the fire burning in a tribute to Herb Ellis and George Coleman penned by Dechter. Somewhat a departure from his work with the Clayton-Hamilton Jazz Orchestra, Hamilton's drumming took on a largely different character in this trio setting and the results were nothing less than invigorating.

Using his brushes for a different take on the Brazilian tinge, Hamilton propelled "Osaka Samba" with panache while Tsuruga used stops that recalled the classic work of Walter Wanderley. "Frame for the Blues" showed off all of Tsuruga's chops as she titled her head back and belted out chorus after chorus. Dechter, like Hamilton, seemed to find this setting especially stimulating and all of his solo choruses were intricately structured and paced statements of great depth.

Saturday's offerings were once again varied and plentiful with the first performance kicking off at 1 p.m. and the final set culminating at around 10:30 p.m. Two of these sets stood out for very different reasons. With only marginal jazz interest, bassist Christian McBride purportedly jumped at the chance to pay tribute to Clevelander Bobby Womack. With a crack ensemble at his fingertips, McBride called upon a revolving door of singers including Nigel Hall, Nona Hendryx, and Avery Sunshine . While alto saxophonist Chris Coles got a chance to step into the spotlight for a few choice solos, the talents of keyboard man Bobby Floyd, drummer Quincy Phillips and guitarist Dan Wilson were largely relegated to mere support.

All the banter and crowd stroking were part and parcel of this type of performance, while McBride smiled and slapped his electric bass exclusively. What strikes one as curious is that if the focus was to be on Cleveland legends and particularly of a soul or R&B guise, why couldn't the realm of material been broadened to include songs associated with the O'Jays and The Dazz Band? Oddly inconclusive, McBride's homage pushed the envelope in more ways than one when Hendryx and an audience member dabbled in some sultry interaction.

Offering far meatier jazz fodder was the festival's conclusion featuring drummer Jamey Haddad and his Under One Sun ensemble. Benefiting from the strong composing of saxophonist Billy Drewes, this group found a collective synergy that often proved mesmerizing to the audience. Although a traditional jazz combo operated at the heart of these performances, additional layers of color were provided by Michael Ward-Bergeman's accordion and Simon Shaheen's oud.

Serving as facilitator to all he surveyed, Haddad's art is not about flash or show. His muse is squarely in service of the music as could be heard whether he was behind a traditional drum set, or up front utilizing a variety of hand percussion instruments in tandem with fellow percussionists Keita Ogawa and Dylan Moffitt.