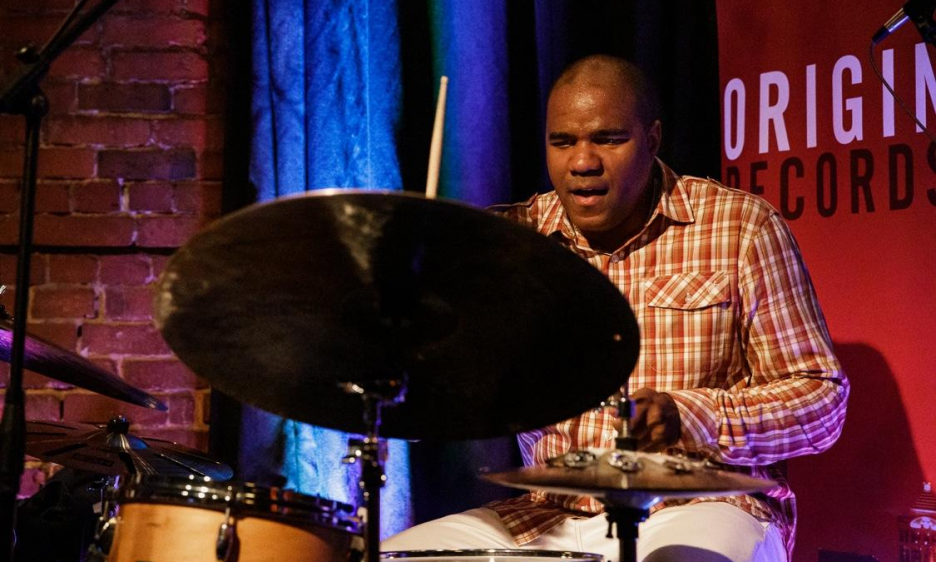 The city of Seattle has a jazz history that dates back to the very beginnings of the form. It was home to the first integrated club scene in America on Jackson St in the 1920's and 30's. It saw a young Ray Charles arrive as a teenager to escape the nightmare of Jim Crow in the south. It has produced such historical jazz icons as Quincy Jones and Ernestine Anderson. In many instances it has acted as a temporary repose for greats such as Jelly Roll Morton, Joe Venuti, the aforementioned Charles, Larry Coryell, Julian Priester and Randy Brecker to mention but a few.

It was the final week of a grand 26-year run for the fabled Tula's Jazz Club in the Belltown neighborhood of Seattle. Pianist Bill Anschell was settling in for a date with his Standards Trio, a combo that includes legendary bassist Jeff Johnson, and uber-talented drummer, D'Vonne Lewis. There is not a lot of preparation required on the part of the band-Anschell will lead the trio through spontaneous interpretations of standards in free-form fashion. Both he and Johnson are ready to go, yet just 30 minutes before downbeat, Lewis has not yet arrived.

"This is probably his fourth gig of the day," says Anschell wryly, a smile spreading across his face. He was not far off. As it turned out, it was his third. Indeed, the versatile Lewis can easily be perceived as the hardest working, busiest musician in the city.

From club dates to studio sessions, Lewis performs both as a sideman and as a bandleader. After a decade-long run with the neo-fusion quartet Industrial Revelation , he is focused on his new band, Limited Edition. As is portrayed on their album Unlimited (Self Produced, 2017), the band focuses on original compositions from Lewis and band members Jacques Willis, Andy Coe, Eric Verlinde and Cliff Colon. It somehow finds an original seam between the Brecker-esque ruminations of Colon, the rumbling undertow of bassist Farko Dosumov, and the quicksilver mallet work of vibraphonist Willis. Through it all, Lewis utilizes his immense chops to create a percussive current perhaps best compared to Coltrane's "sheets of sound" concept on saxophone that was undertaken on drums as well by Lewis' prime influence, Elvin Jones. In the process, he accomplishes this without ever resorting to overplaying.

Lewis' style is a bridge between his true roots as a jazz drummer, and the elements of funk and R&B that have followed him not only through his personal musical journey, but that of his family through four generations in Seattle. His grandfather, Dave Lewis, was a legendary Seattle musician, who created the "Seattle Sound" as both a pianist and organist. His instrumental music was a melting pot of the sounds of his time, blending jazz, R&B and rock 'n roll into one musical gumbo. He was also a key figure in removing the barriers segregation had placed in Seattle, limiting opportunities for black musicians and audiences alike. His stand at the all-white venue, Parker's Ballroom in 1955, led to the dissolution of separate white and black musician's unions in Seattle. His grandson would as well dedicate his combos to play music that reflects the many musical currents that filter through the jazz scene in the city. As a leader, he purposely changes combos often to express the multiplicity of impressions that add up to create his persona as a drummer and composer.

"I like to start a few bands every couple of years so that I can show entrepreneurship within my craft and not just be another 'musician for hire," he says. The Lewis family roots actually hark back to his great grandfather, the father of the legendary Dave Lewis Sr., known in the Lewis clan as "Big Pop."

"Big Pop is the one that really got it started, and gave my grandfather lessons. His mom actually played organ in churches. She was a first call organist, all the churches wanted her to play. He started playing piano and then he heard his mom, and she would give him lessons. He would switch over to organ later," he states proudly.

The influences one hears from Lewis when he plays, clearly are deeply rooted in his familial ties, and his upbringing in the storied high school jazz program at Roosevelt High School in Seattle. There, bandleader Scott Brown encouraged the young Lewis to listen to the music. It was then that the titans of jazz drumming were revealed to him.

"You have to know your roots and where the music is coming from, know how to go back. Mr. Brown would tell us to go and listen to the records, he stressed listening a lot. I wanted to listen more, to know who Miles Davis was, who was John Coltrane? Now I hear their sound, it starts getting familiar, and now I listen to Brian Blade and hear Elvin [Jones] in his playing. You have to hear that history. All the 80's funk drummers gravitated towards Tony Williams, doing all his licks, applying his stuff. If you didn't know the history, you would never know where it was coming from," says Lewis.

As strong as those influences are, Lewis has created a very personal sound by focusing not only on the rudiments of the craft and the mentors that created them, but on creating actual sounds within his style.

"I always have to work on the rudiments, for me it's more about sounds, how can I create cool sounds to work with the drum set. It's still combination style, but just getting familiar with the entire set. Sounds can go anywhere, in any style. Simple things, even if it's just getting to know how with the stick to hit both the rim and the snare, or getting interesting sounds from any of my cymbals. Not really chops, licks, or rudiments, but how I can apply a certain sound in any kind of music," he says.

The jazz scene in Seattle is a diverse palette of sounds, from modern post-bop jazz, to Latin, to avant-garde or free jazz. Elements of R&B have been around since Ray Charles lived here in the 1940's. Lewis' original music is a fusion form of all these elements that have been simmering to a fine brew over the course of the last century. As a sideman, he can be seen on stage throughout the entire spectrum of what the city has to offer.

"I think it's rich. There's all these different scenes that you can be a part of, there is so much going on," says Lewis.

In recent times, Lewis has become the full time drummer in the prestigious Seattle Repertory Jazz Orchestra (SRJO). Lewis has had to replace the legendary Clarence Acox behind the kit, who is also a co-founder of the 18-piece ensemble. He has had to rely on things beyond his considerable talents, reading big band charts for the first time since his days at Roosevelt. Ironically, his band director there sits in the trombone section of SRJO, as do several of his mentors and jazz heroes growing up in the Emerald City.

Lewis is the father of a seven year old son, who has become the fifth generation of Lewis family musicians in Seattle. He is already showing considerable chops, something that brings a smile to his proud papa's face. It completes another circle within the family tree of a family that is a pillar of music history and influence in Seattle.

Back at Tula's Lewis settles in for two sets with the Bill Anschell Standards Trio. The trio has been riding the momentum of their latest release, Shifting Standards (Origin, 2018). There is no set list, the pianist plays the opening passage of a tune, with Johnson and Lewis listening, then jumping into the fray.

"I love playing with that group, because that's probably the most free I get to be. It's the most we get to vibe off each other."