By KARL ACKERMANN
February 6, 2018
Sign in to view read count 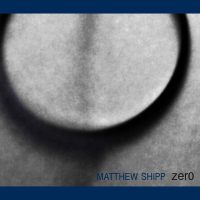 In a recent interview with Jazz Trail's Filipe Freitas, pianist/composer Matthew Shipp talked about returning to his long-standing inquiry into how spontaneous free improvisation develops. His thought process involves "the same metaphysical concepts that have always been what I ask -how things come out of nothing?" Shipp's line of questioning is strikingly close in its relationship to the concepts of a physical universe arising from "nothing," the nothing being the energy of empty space. Shipp—like physicists—expresses a fascination with what emerges from the abyss, but his creative process is not wedded to any particular theory. His new piano solo release Zero is not—by Shipp's own description—a concept album, though many of the song titles would indicate otherwise. Like the rest of his solo work, it is completely enthralling.

Zero comes only months after Shipp's live solo Invisible Touch At Taktlos Zurich (Hatology, 2017). The title track is not the "Zero" that appeared on Shipp's One (Thirsty Ear Recordings, 2005), also a solo release. In this particular piece, as in the closing counterpart "After Zero," Shipp lays out a microcosm of the program. These compositions are, at various times, lyrical, edgy or just beyond explanation. There are pieces more overtly lyrical, sometimes with classical overtones such as "Abyss Before Zero," "Cosmic Sea" and "Zero Subtract From Jazz." The disjointed melodies and abstractions of "Pole After Zero," "Piano Panels" and "Ghost Pattern" are somewhat traditionally organized but still absorbing and mysterious. More enigmatic are the wide open excursions on "Zero Skip and a Jump" and "Pattern Emerge." "Blue Equation," true to its title, has the blues bouncing off Shipp's geometric angles.

By the time Shipp had released his first solo album Symbol Systems (No More, 1995) comparisons to the familiar cadre of avant-garde and free jazz pianists should have been considered irrelevant. Shipp's approach and style of playing have long been uniquely his and easily identifiable, in large part because of the intangible way he thinks about music, and the way he doesn't. Zero gives us the expressive assurance that Shipp's approach—as solidly based in acumen as in musical virtuosity—continues to demand thoughtful listening. No concept necessary.

The CD format of Zero includes a spoken-word bonus disc, "Zero: A Lecture on Nothingness."