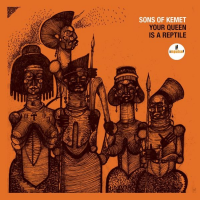 It is appropriate that this, British-based Sons of Kemet's third album, should be released under the Impulse banner. During its heyday, Impulse was the home of John Coltrane, Alice Coltrane and Pharoah Sanders and as such was the chief platform for the cosmic/spiritual jazz movement of the 1960s and 1970s and that movement's demand for white-majority society's recognition of black culture and respect for black people. In 2018, the multi-racial Sons of Kemet, led by tenor saxophonist and composer Shabaka Hutchings, is a prominent British driving-force behind a similarly politically-assertive genre reboot. So many of Hutchings's musical heroes—who include the Coltranes and Sanders—have been housed under the label, that he says, "It's an honour to join the family." And just in case anyone misses it, Mzwandile Buthelezi's cover art—not just the album spine—is rendered in Impulse's signature orange and black.

Your Queen Is A Reptile offers a stripped-down alternative to the sometimes overlong and overbaked cosmic offerings of artists such as Kamasi Washington. Washington's otherwise excellent triple-CD debut, The Epic, would have been improved by rigorous editing, and less wafting and warbling from its heavenly choir. (Excessive running-time was addressed on Washington's follow-up, Harmony Of Difference. Saccharine choral overload, unfortunately, was not). The nine tracks on Your Queen Is A Reptile, by contrast, are paragons of concision and grit.

More importantly, perhaps, unlike Washington's take on cosmic jazz, the Sons of Kemet's music is explicitly grounded in everyday life, specifically the everyday life of people of African-Caribbean heritage living in Britain. Performance poet Josh Idehen adds excoriating verses to "My Queen Is Ada Eastman" and "My Queen Is Doreen Lawrence," and toaster Congo Natty rides "My Queen Is Mamie Phipps" dub style. All nine tracks are named after women of African heritage, and the sleeve notes contain a hard-hitting refutation of the relevance of the British monarchy to Britain's immigrant diaspora.

The line-up on the album differs a little from that on Sons of Kemet's debut, Burn, and second album, Lest We Forget What We Came Here To Do. Hutchings and Theon Cross, who replaced tuba player Oren Marshall on Lest We Forget, are both still here. But the high energy, yet light footed, twin-drummer team of Tom Skinner and Seb Rochford is expanded on some tracks to a trio by Moses Boyd or Eddie Hick. There are also guest appearances by saxophonists Nubya Garcia and Pete Wareham.

The title Your Queen Is A Reptile, by the way, references the surprisingly widespread belief that the members of the British royal family are all shape-shifting lizards from an alien civilisation. The jury is still out on that, but not on the inspirational lives of the women cited in the track titles. As large chunks of British society, and parts of American society too, whip themselves into an orgy of excitement over the upcoming marriage of Prince Harry and Meghan Markle, Your Queen Is A Reptile offer a timely antidote—and one given added impact by the multi-racial composition of the band.