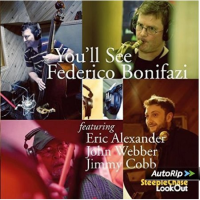 Federico Bonifazi is a young, unknown Italian pianist/composer who had the wherewithal and common sense to hire Jimmy Cobb as drummer on this, his second album.

The name on the cover of the last surviving member of the Miles Davis sextet that made Kind Of Blue can't help but sell records.

At the age of 87, Cobb is still a hot property thanks to Kind Of Blue, hailed as the greatest jazz record ever, No.12 on Rolling Stone magazine's list of the 500 greatest albums of all time—only just behind Elvis's The Sun Sessions, mark you!

While vastly overqualified for this gig, Cobb is playing with people around 60 years his junior. He gives a remarkable performance: no problems keeping up; timing immaculate; and all his customary taste and discernment.

"Sadness For You," a ballad reflecting on lost love, is one of the better items in the Bonifazi songbook. On this and again on the lyrical, curiously named "The Chicken," Alexander relaxes a little, which is all to the good. Not only that, he brings "The Chicken" to a close quite expertly.

Cobb uses brushes to kick off the final song, the quirky, perky "Escape" taking up his sticks in the closing stages for a short but sweet farewell solo.

In addition to such recording dates and his many teaching activities, this remarkable octogenarian finds time to lead three bands: Jimmy Cobb's Mob; The Jimmy Cobb Reminiscence Band; and the Jimmy Cobb "So What" Band.

You can't help but wonder if the young, goatee-bearded hipster who wandered with studied nonchalance into Columbia's 30th Street New York Studio on March 2 and again on April 22, 1959, to cut Kind Of Blue ever in his wildest dreams imagined it would come to this.

Steps House; Vedrai Vedrai (You'll See); Ballo Di Coccinella; Sadness For You; What Is Love?; Suspended In The Air; The Chicken; Escape.