Roberta Gambarini: You Are There

By SUZANNE LORGE
February 12, 2008
Sign in to view read count 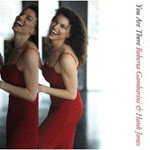 Grammy-nominated vocalist Roberta Gambarini has been working with pianist Hank Jones since 2001, when the pair first met and performed together at the Lionel Hampton Jazz Festival at the University of Idaho. Since then she's toured the world with Jones and his sidemen, George Mraz on bass and Willie Jones III on drums.

Live performance on the road and in concert was the only preparation Gambarini and Jones used in recording their first album together as a duo, You Are There. According to Gambarini, they merely met up at Nola Studios one afternoon in 2005 and proceeded to record 17 of their favorite tunes. The new album includes 14 of them, most committed to digital bits in just one take.

In keeping with the impromptu nature of the recording, Gambarini turns out a casual performance—but one that is also precise and nuanced, as only an expert singer and a closely attuned pianist can accomplish. The two obviously enjoy working together and their personal affinity adumbrates their musical bond: Gambarini laughs delightedly at times and at others Jones murmurs imperceptibly to Gambarini over his solos. Their dialogue is one between co-creators—no one leads and no one follows.

The tracks explore various melodic permutations of standards by the likes of Duke Ellington, Benny Carter, Billy Strayhorn, Irving Berlin and E.Y. Harburg—the intent, it seems, being to extract as much beauty from the line as possible. Gambarini displays an aptitude for bebop scatting unusual in singers of her generation, especially on "When The Lights Are Low" and "Just Squeeze Me," during which she and Jones swap brief and inspired musical anecdotes.

Beyond melodic interpretation, the pair apply great restraint to the tempi; even on tunes like "You're Getting To Be A Habit With Me," more commonly played at a steady clip, Gambarini lays back into the cheerful lyrics while Jones expands leisurely on the melody.

This CD promises to be one of the better vocal releases of 2008. Beyond Gambarini's impressive vocals, listeners are advised to pay close attention to Jones' intuitive understanding of phrasing and dynamics. Also, make sure to read Gambarini's liner notes, which reveal the warm and thoughtful person behind the bright talent.

You Are There; I'll Be Tired Of You; People Time; When Lights Are Low; Deep Purple; Reminiscing; Suppertime; Just Squeeze Me; Something To Live For; Stardust; Lush Life; You're Getting To Be A Habit With Me; Come Sunday; How Are Things In Glocca Morra?.