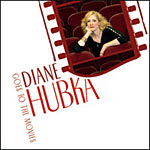 The marketplace is clotted with exceptional recordings by female jazz vocalists/instrumentalists, the vast majority complimenting their voices with a certain piano talent. Diane Hubka is one of the few, if not the only, female vocalist who also plays guitar. She has enjoyed considerable exposure with recordings like, Haven't We Met (A-Records, 1998), Look No Further (Naxos, 2000), and You Inspire Me (VSOJAZZ, 2002). Diane Hubka Goes to the Movies is her first release since You Inspire Me, during which time she has taught, performed and worked in jazz promotion. With this release, Hubka roars back on the scene with an astute collection of standards.

One of the most attractive things about Goes to the Movies is that it is based on an established theme that is carefully kept to. The thirteen selections are derived from the scores of classic movies from 1937 (A Day at the Races) through 1979 (Close Enough for Love). On this collection, Hubka straps on the seven-string for only the penultimate selection, "Manha de Carnaval," from Black Orpheus (1959). Hubka accompanies herself on the piece, showing that her Portuguese and guitar are equally lyrical. The disc closer, "Invitation," from Invitation (1952), continues the Latin vibe from "Manha de Carnaval" and is accented with 64th-note guitar runs by Larry Koonse.

"The Look of Love" blasts out from the heyday of Burt Bacharach and Hal David, from the James Bond satire Casino Royal (1967). The tune is gently punctuated by Carl Saunder's flugelhorn and pianist Christian Jacobs' restrained and tasteful solo. This might be the disc's highlight, if it were not for the other twelve tunes. Jobim's "Double Rainbow," from The Adventurers (1970), allows Hubka latitude to demonstrate her vocalese chops over a Latin theme. "I'm Old Fashioned" is dispatched over Larry Koonse's shifting rhythms and buoyed by Jacobs' piano. Again, there is the hint of Latin in their support.

James Bond shows up again on the ballad "You Only Live Twice," from the 1967 movie of the same name. Hubka's pretty yet durable voice purrs the words through her impressive modular range. In some ways, Diane Hubka is the James Brown of female jazz vocalists: the hardest working woman in jazz. This disc rewards both her and the listener for her effort.