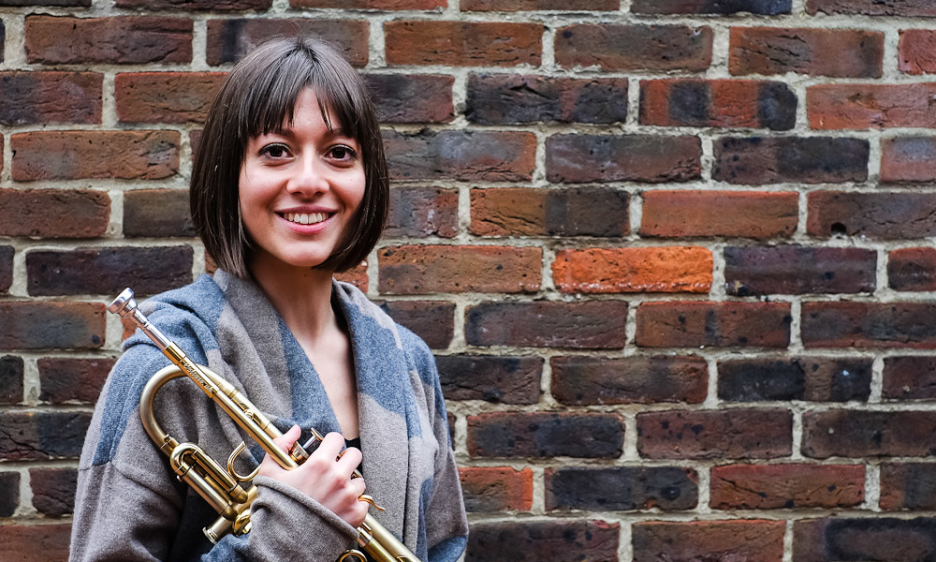 Performances by student orchestras rarely qualify as must-see events. Audiences tend to be composed of fellow students and friends and family members and the music does not always measure up to the volume of applause. But pick your gig carefully and you can strike gold. In London, a good bet, always, are performances by the Guildhall School of Music & Drama's Jazz Orchestra. Not only does director Scott Stroman front talented, well-rehearsed lineups, he also books guest soloists from amongst the Guildhall's roll call of star alumni. This includes key stylists on London's happening woke jazz scene such as reed player Shabaka Hutchings, singer Zara McFarlane, keyboardist Sarah Tandy and tonight's guest, the British-Bahraini trumpeter and flugelhornist Yazz Ahmed. It does not hurt that the Orchestra's performances are given in the Guildhall's well appointed Milton Court Concert Hall.

The bar was set high for Ahmed following a memorable performance in the summer by saxophonist Steve Williamson, a trailblazer for the new London scene who in 2019 has made a series of welcome comeback appearances after years of illness-imposed seclusion. Williamson appeared with the Orchestra as part of the Guildhall's Celebrating Coltrane week, which on another evening featured a second Guildhall graduate, singer Cleveland Watkiss.

Ahmed has been called, with some accuracy, "the high priestess of psychedelic Arabic jazz." Her music does not so much blur the lines between jazz and electronics and Middle Eastern music as render those lines irrelevant. She went international in 2017 with her second album, La Saboteuse (Naim), which had a guest appearance from Shabaka Hutchings, and notched up another winner in 2019 with Polyhymnia (Ropeadope), made with a 26-strong collective lineup including Sarah Tandy, alto saxophonist Camilla George, tenor saxophonist Nubya Garcia, guitarist Shirley Tetteh and other London luminaries. Both albums are wholly composed of original pieces.

After two opening numbers from the Jazz Orchestra—Nikki Iles' "Hush" and Stroman's "Walk Softly"—Ahmed began her set with two pieces from Polyhymnia, a suite inspired by courageous and influential women. "Ruby Bridges" is dedicated to the then six-year old girl who in 1960 played an important role in breaking New Orleans' segregated school system; Federal Marshalls had to protect Bridges from abusive white nationalists as she entered and left William Frantz Elementary School. "Barbara" is a salute to the pioneering British female saxophonist Barbara Thompson. (Thompson, incidentally, has a great sense of humour. From 1967 until his passing in 2018, she was the wife of Jon Hiseman, leader of the jazz-rock fusion band Colosseum. An interviewer once observed, "Your husband is a musician, too, isn't he?" "No, he's a drummer," said Thompson.)

Switching from flugelhorn to trumpet, Ahmed closed the first set with "A Paradise In The Hold," a tune which draws on the drum music played by women pearl-fishers in Bahrain. She used samples of that music, and live-looping of her own performance. A dramatic piece which builds to blazing climax, it lends itself superbly to big-band orchestration. The second set included two tunes from La Saboteuse: the title track and "El Emadi." Foremost among several promising soloists in the Orchestra was electric guitarist Charlie Heywood-Snell, who has a delightfully fluid style. An altogether excellent evening.