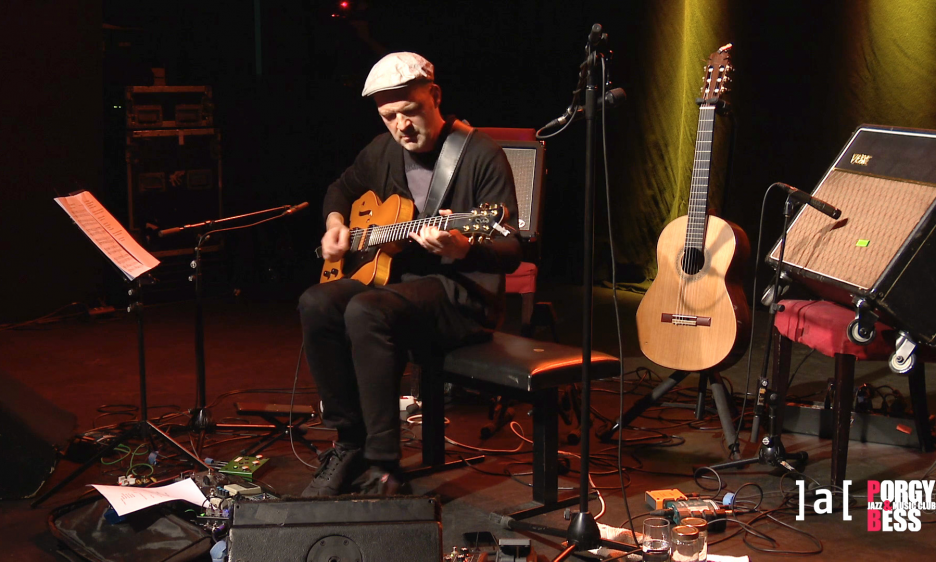 By Friedrich Kunzmann
June 4, 2020
Sign in to view read count

Originally, all events at the Porgy & Bess jazz club in Vienna had been cancelled for public attendance until the end of August—out of precaution in light of the Coronavirus. In adaption to the horrendous circumstances for any cultural lieu of gathering, the Porgy swiftly put together a high-quality streaming set-up in no time, which has been live-streaming concerts from mostly local jazz acts at least twice a week for over a month and will continue to do so until at least the end of August—on a donation ("pay-as-you-wish")-basis. The sudden announcement that the first concert after an over two-month break could be attended by a limited audience on Saturday, May 30th, came short-notice and unexpectedly, even in the wake of the steady loosening of the lockdown measures. Coincidentally, that date fell on the solo program of one of Austria's proudest jazz exports today: guitarist Wolfgang Muthspiel.

Muthspiel, whose trio gig at the Porgy featuring Larry Grenadier and Jeff Ballard had to be postponed from June 26th to November 15th, released his second trio outing as a leader for ECM in March this year. The album, Angular Blues, sees him partner up with usual suspect Brian Blade on drums and Scott Colley in place of Larry Grenadier on bass and has been welcomed with open ears by the press and fans alike. The accompanying U.S. tour had to be postponed as well, to an, as of yet, unknown time. Like the new album, Muthspiel divided his solo set on this late May eve in one-third acoustic guitar recital, and two thirds on electric guitar.

Opening in virtuoso fashion on classical guitar, Muthspiel performed a twenty-minute suite of five different acoustic pieces, melded together by improvisation and repetition of various motifs. Starting with "Triplet Droplet," the Austrian guitarist then walked the audience through a variety of modes with "Locrian Star" and "Aeolian Fall," before performing an utterly convincing homage to Ralph Towner titled "Ralphone" and then ending on a self-penned tremolo etude, simply titled "Etude N°1." Recorded via a dynamic microphone and an internal guitar pick-up, his acoustic guitar waves filled the sold-out venue with such intimate transparency that the scattered plastic dividers standing on tables between audience members became barely noticeable. Rarely does Muthspiel have the opportunity to show off his technical acoustic guitar skills in the context of his recent trio or quintet efforts to this extent, making this display all the more rewarding.

On the brief pop/singer-songwriter-infused summer tune "Love and Haystacks" (found on Vienna Naked, Material Records 2012), Muthspiel then took the opportunity to introduce his vocal abilities and let his high baritone timbre croon to friendly changes, welcoming the warmer time of the year. Small vocal exercises aren't new to Muthspiel's repertoire and feature prominently on albums such as Vienna World (Material Records, 2014), from which he'd later also perform the blues-tinged "Angel Envy."

The electric guitar portion of the program was introduced by "Triad Song" off of 2016's quintet recording Rising Grace (ECM). Now making more use of the various pedals beside his workstation, Muthspiel recorded a loop of the song-defining arpeggiated chord progression to subsequently solo over with a mix of bop language and an accent that is uniquely his own. Like on the new album, the set also featured a Canon, this time around in 9/8, performed with himself via the longest delay his pedal is capable of creating. The anticipation of counterpoint and simultaneousness of comping and soloing at this level is another standalone feature of Muthspiel's in recent times.

Angular Blues is the guitarist's first album as leader for ECM, on which he performs standards. Two to be exact. With "Darn That Dream" he included a remarkably fluid performance of another in his solo set and held the room captive with a seemingly infinite knowledge of voicings that glue to his frets with absolute command. Even in this—a more bop-oriented environment —Muthspiel exhibits an escpecially distinct and original voice as a guitarist. The Brian Blade-co-penned homage to Senegalese singer Youssou N'Dour, featured on Blade and Muthspiel's duo venture Friendly Travelers (Material Records, 2007), closed the regular set on an extroverted note. Percussion-playback, numerous live loops and various other effects saw Muthspiel in a relaxed light, unbound and having fun, as if he was practicing and playing around with ideas in his own living room. Between ostinato-based loops and pentatonic melodic fragments he didn't hold back, taking off on a voicing spiral washing through the circle of fifths with whimsical aplomb. A quietly precise acoustic guitar solo-rendition of "Camino," the center piece from Angular Blues, was the sole encore to a very satisfying and most welcome evening of live music after a long, forced break. To be in such close proximity to this exquisite craft being forged in the moment, and experiencing the bliss of its abandon in the company of a like-minded crowd has been sorely missed, and never felt this big a privilege.