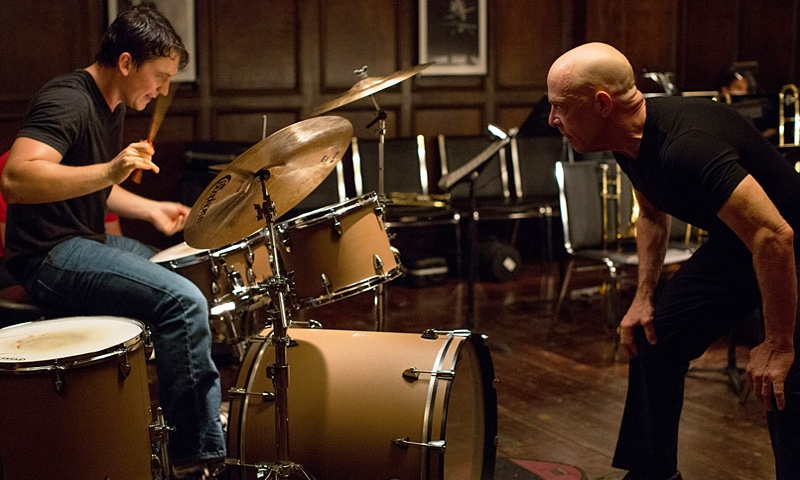 Whiplash is director Damien Chazelle's portrait of an aspiring jazz drummer who falls prey to an overbearing conservatory teacher. Although the film has attracted well-earned praise for its acting and editing, this review sets technical flourish aside and approaches Whiplash not as a film, per se, but as a failed musical exercise—a didactic riff, if you will, on the power of "greatness" and the suffering born of its realization.

Andrew Neiman (Miles Teller) is the 19-year-old protagonist, whose single stroke roll opens the film's fade from black. Andrew is introduced alone, practicing under cover of night in a room lit like a stage, foreshadowing the atmospheric conditions of his story's end. Into that hermetic space walks Terence Fletcher (J.K. Simmons), known within and without the school as a teacher-performer of intense repute. Indeed, reputation inspires Fletcher to a height of authoritarian ecstasy that he, at first, passively lays on Andrew in a crushing deflation of promise:

This sequence establishes a feeling of rudiment that assaults almost every scene to follow as Andrew's dreams suddenly become barriers, his drumsticks like antennae tentatively feeling their way through a prestigious institutional universe, where jazz is taught by way of repetition, self-discipline, and continual reappraisal of a common core. Despite shaky beginnings, Fletcher keeps an ear on Andrew, lingering as a ghostly presence in his periphery—whether as a shadow in a frosted glass door or as target of Andrew's snuck glances. Much to Andrew's surprise and pleasure, Fletcher recruits him for a senior band session, taking on the film's eponymous Hank Levy tune with a highly regimented group of musicians who know what to expect from their despotic pedagogue.

Fletcher fancies himself a catalyst of development, insofar as one must excel to fit his mold of expectation. Much of that expectation burns an all-seeing eye into the palm of his conducting hand. A closed fist means stillness, a chance to self-assess and regroup in the heat of embarrassment. It is his deepest threat, a paralyzing card he lays on the table without compunction, culled from the stacked deck of his darkest mind:

From this we can surmise that Fletcher has relatively little interest in the music. Neither does the film. For while both he and the camera would seem to crave an artistry so incendiary that the audience burns to experience it, what both actually want is the awesome silence captured in the knot of his fist. We may see this in the personable way Fletcher approaches Andrew in the hallway between rehearsals, when in fact he is storing personal information about the young man's broken family for later strategic deployment. In this way, he acts the part of the jazz tourist, amassing a bank of effective licks heard elsewhere that he gleefully waits to unleash. He is, in this respect, a confrontational improviser circumscribed by his own design, one who's looking for a performer but not a musician. Fletcher's penchant for indignation feeds Andrew's drive to succeed to the point of marring the latter's interpersonal relationships and ambitions of rising above and beyond what anyone (family included) expects of him. And this is where the film-as-musical-object begins to disintegrate.

Whiplash wasn't made for musicians or their admirers, but filmgoers seeking visual gratification. On that note, anyone who thinks that jazz is taught and produced only through big band charts in an environment utterly lacking in extracurricular interaction and study, who swallows whole the notion that Buddy Rich is the be-all and end-all of drumming, might very well find the film instructive. But this comes at the expense of any meaningful rumination on the necessarily multifaceted geometry of musicianship. Instead, it favors reception over production. As if to belabor this point, time and again Fletcher returns to a distorted anecdote that finds Jo Jones nearly decapitating Charlie Parker with a hurled cymbal during a legendary jam session. As Fletcher would have it, this incident prompted Parker to practice harder than ever, thus becoming the Bird we know and love. In reality, Jones merely lobbed a cymbal at Parker's feet in a playful gesture of derision. That said, the credibility of Fletcher's retelling is secondary to his motivations for telling it. The point is that he believes his version so adamantly that he uses it to badger his students—to say nothing of himself—into thinking that his methods are sound.

Further cracks appear upon closer inspection: images of Andrew practicing until his hands bleed (pure exaggeration); Fletcher's counting methods (dubious at best); and, most disappointing of all from a musical standpoint, the slipshod and pretentious solo that is the film's climax—which in any real situation would likely have gotten him kicked off the stage. Here is where the film veers into sensitive territory, bolding the misguided notion that mastery means playing hard, fast, and with enough machismo to render any resistance futile. If such were the golden rule, we'd have no Paul Motian, no Jon Christensen, no Peter Erskine. Indeed, as Erskine observed in an interview for KCET Los Angeles, "A conductor or bandleader will only get good results if he or she shows as much love or enthusiasm as the discipline or toughness they dole out." If I take Erskine's comment correctly, sensitivity to multiple parameters is a key in jazz performance, and is exactly what gets lost in the Sturm and Drang of the film's onslaught. We would seem to get a hint of it when, during an eerie transitional scene, Andrew encounters Fletcher's tepid pianism in a jazz bar. Following that performance, the two have a conversation in which Fletcher bemoans the popularity of what he calls "Starbucks jazz" and asserts his belief that pushing people is necessary to create the Louis Armstrong's of the world. But why should such idealistic heights be the goal of any musician? Such thinking underestimates the value of independent musicianship, without which none of the jazz greats would have attained their status to begin with, and reinforces a subjective hierarchy of appreciation. This makes all the more ironic the film's constant product placement, which after about the fifth flash of a Yamaha instrument logo made this viewer, at least, question any notions of integrity being discussed therein.

One tragic irony is that Fletcher ultimately wins by methods I will leave for the viewer to contemplate. Suffice it to say, this victory could be upsetting to musicians who have undergone actual social, political, or racial struggles to get where they are. The film ignores such issues, even as it offensively gorges on others. The increasingly homophobic cast of Fletcher's abusive tirades, for instance, flags many contextual issues at play in a dangerous attempt at humor. Wherever it might stem from, his anger begs an audience. On that note, the film fails to recognize the history of jazz as such, treating it more as a code devoid of emotional variables. In spite of kneejerk nods to Buddy Rich and Charlie Parker, Rich is unfurled like the poster child for all jazz drummers, while Parker's inventiveness is subverted in favor of his willingness to take Jones's supposed punishment like a man and forge from his devastation a remarkable grammar.

To be fair, the film purports to be nothing more than entertainment, and so perhaps the real problem it foils is systemic more than it is industrial. But one is hard pressed to see this foiling as intentional. If any musicians are going to hold a grudge against Whiplash, it won't be due to fears of misrepresentation but underrepresentation. There just isn't enough jazz to make it float. Like Fletcher's hand, the film fans Andrew's creative spark by hindering it. Of course, even masters will work off a chart once in a while, if only to navigate the changes of new or unfamiliar material. This doesn't mean that the musician is forever bound to such devices. The melody is, of course, an integral part of any tune, but most often provides a springboard for interpretations that tumble beyond the page and into the emotive otherworld that invites players and listeners alike on the path of discovery.