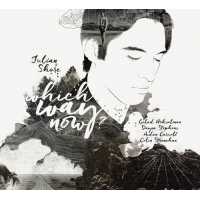 If the jazz world decided to elect a single questioning phrase to sum up its craft, this album title would be a great candidate. With three words and a single punctuation mark, the very heart of jazz—a music of infinite decision(s), not indecision, as some may (mis)read that—is laid out for all to see. Those who operate in the jazz orbit are constantly searching, peering at the unknown and exploring the recesses of nature, body, and mind. Pianist Julian Shore, a rising star with a wide gaze and a firm sense of self, is one such person. He uses each song as an opportunity for invention on the enthralling, multifaceted Which Way Now?.

While the nature of possibility can have a crippling effect, it seems to do just the opposite for Shore here: It frees him up, allowing him to make each piece a self-contained story that's not beholden to what comes before it. However, a sense of personalized sophistication and quiet intelligence, stitched into every performance, ultimately connects them all. There's reflective, string-enhanced music that speaks with simple melodic grace ("Our Story Begins On A Mountain"); an entrancing composition that finds Shore working with vocalists Michael Mayo and Alexa Barchini ("Alpine"); an awakening and continually evolving take on a Dizzy Gillespie classic for a trio of piano, bass, and percussion ("Con Alma"); a touching hymn for current times for Noah Preminger's clarinet and Shore's Wurlitzer ("All Heart"); and a pleasant, countrified stroll in three that puts Preminger's tenor in the saddle ("Pine Needles"). Then it all comes to an end with a dreamy, classically-derived sendoff ("Lullaby (From Clair De Lune").

Shore enlists a dozen top notch modernists to bring his many and varied musical visions to life on Which Way Now?. Album regulars like guitarist Gilad Hekselman and tenor saxophonist Dayna Stephens prove to be team players, tasteful soloists, and expert colorists, while one-shot guests like percussionist Samuel Torres and multi-reedist Michael Thomas add new dimensions to Shore's music when they appear. Most of the players on this roster are more than capable of coming on strong if they wanted/needed to do so, but they use their strength sparingly, playing to a song's viewpoint instead of putting everything on the line.

Some albums tend to offer more enjoyment when absorbed in a specific fashion—in a dosage of one-song-at-a-time or in a complete, top-to-bottom listen—but this one scores high marks no matter how you digest it. Single tracks make for complete and satisfying listening, but taking in Which Way Now? as a whole allows those on the receiving end to fully appreciate the depth and breadth of Shore's work. He's one to follow, regardless of which way he goes.

Our Story Begins On A Mountain; Which Way Now?; Back Home; Moss, Mansion, Sandstorm; Alpine; Across The Ice; Con Alma; All Heart; Pine Needles; Lullaby (From Clair De Lune).