Home » Jazz Articles » Rob Clearfield: Wherever You're Starting From 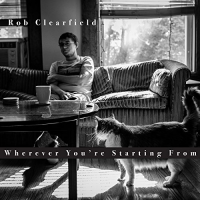 Chicago-based keyboardist Rob Clearfield has long been an active presence in the Windy City jazz scene, working with folks like bassist Matt Ulery, drummer Jon Deitemyer and guitarist Daniel Bruce. Just last year, his appearances on Bruce's Earthshine (ears&eyes Records) and trumpeter Adam Larson's Second City (Inner Circle Music) were indicative of Clearfield's stylistic diversity, proving that he's as comfortable churning out Fender Rhodes-based grooves or doing an impressionistic take on Nirvana's "Smells Like Teen Spirit" as he is in laying down straight-ahead piano solos. On his latest release under his own name, Wherever You're Starting From, it's the classical aspect of Clearfield's muse that comes to the fore, with twelve well-crafted solo improvisations that offer further evidence of the pianist's impressive range and ability to draw inspiration from a host of sources, from Johannes Brahms to John Coltrane.

The almost clinical precision of Clearfield's playing on this record might lead some listeners to overlook the jazz sensibility that lies just below the surface. The recording process itself contributed to this quality to some degree, as it involved a careful editing of pieces that were originally much lengthier, resulting in music that is concentrated and attentive to minute detail, without a lot of overt chance-taking or jaunty excursions. When listening to Clearfield's reverential rendering of Brahms's "Intermezzo No. 2 in B-flat Minor," one can indeed appreciate the pianist's genuine engagement with the classical tradition. But "What Was Your Name Again?" allows for some strutting, with Clearfield's vigorous left hand anchoring a dynamic, motion-filled improvisation, and "Blues in C" does indeed offer a faint glimpse of a blues-centered disposition, albeit abstractly delivered. More frequently, though, it's the yearning beauty and crystalline clarity of Clearfield's music that stand out most transparently, with the gentle reverie "Alice" one of the album's highlights.

Perhaps the best illustration of Clearfield's distinctive melding of jazz and classical forms comes in the seven-minute version of Coltrane's "Giant Steps." In keeping with the spirit of the album, its jazz inflections are muted, with only the barest hints of the melody emerging fleetingly. But the rich creativity of Clearfield's treatment is striking, and it lends a dark emotional weight to the piece that is quite compelling. Maybe down the road we'll see an album's worth of Clearfield's engagement with jazz classics like this one, as it's evident that he has a unique perspective that could bring a great deal of originality to such an undertaking.