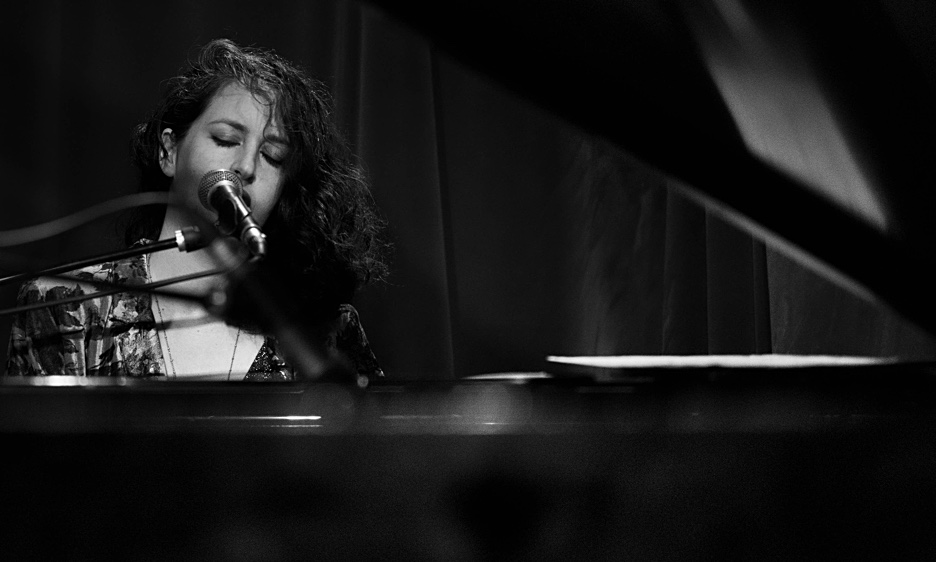 In celebration of her debut album as leader, pianist and vocalist Noa Fort presented a concert of original songs at Cornelia Street Café. With trumpeter Josh Deutsch, bassist Dan Loomis, and drummer Ronen Itzik sharing the platform, Fort took her listeners on an intimate journey through lyrical and melodic shades of being. Because the set consisted of material both from and subsequent to said album, one could hear the ways in which her songwriting has strengthened and opened itself to possibility. In that respect, it was an honor to bask in the breathing room by which she and her bandmates filled lungs to full capacity before expelling their wisdom. In this regard, the dance of unspoken communication that is "No World Between Us" (the album's title song) emoted in darker inflections, as did "Mirrors," tracing waves of emotional transference one crest at a time. The latter actualized one of the evening's three distinct themes: the difficulty of turning a material reflection of the self into an opportunity for self-reflection in the abstract. Expressing this transformation in art is a rare gift, one deepened by such songs as "Winter Requiem" and "Unwritten Signs," which despite their differences sought the same relief. Where one was the sonic equivalent of icicles closing in, the other was an uplifting groove which highlighted Deutsch's depth charges and Itzik's lock-stepped soloing.

A second theme centered around suspension emerged by way of other album touchpoints, especially the opener, "Now is Our Time." Between Loomis's introductory slides and Deutsch's pulling of harmonic threads through the loom of Fort's piano, an emerging meditation set the tone for a certain presence of mind unique to a voice that carries the weight of experience with unforced resignation. Moments of awareness were likewise significant in "The Guest House," built around the poetry of Rumi. A newer song in a similar vein, "There is Some Kiss," imagined moonlight and love of self, and pointed toward a third theme: that of identity. Whether in "The Stories We Tell" or "Leaving Home, Going Home," the band negotiated a balance of tension and release that spoke with authenticity of intent. A remarkable expression of this concept occurred in "Deeping," which found the core trio constructing a mosaic of monologues and wordless vocals. And when Fort invited the audience to join its voices in "Holding," we found ourselves attuned to the ways in which our own identities had been influenced by this sharing of creative spirit.

Fort doesn't assault us with her voice, but wields it like an artist's brush across the resonant canvas of her pianism, itself neither anticipatory nor reactive but an equal partner. In her band she has found artists of kindred temperament who are unafraid to let each layer dry before adding another, and with whom she actualizes a vital philosophy: namely, that a life lived consistently is no life at all. Its topography is defined by peaks and valleys, and it's all we can do to chart its erosions along the way.