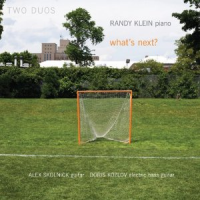 Randy Klein launched his Two Duos series with Sunday Morning (Jazzheads, 2010), pairing the pianist up with trombonist Chris Washburne and tenor saxophonist Oleg Kireyev, but he leaves the horns behind for this follow-up. This time around, Klein turns to two different, but equally skilled string men. Guitarist Alex Skolnick, reborn as a jazz guitarist but best-known as a heavy metal icon thanks to his work with Testament, and bassist Boris Kozlov, who anchors the Mingus Big Band with his acoustic axe but wields his electric here, carry the torch passed along by the horns.

The concept hasn't changed at all from the first record, as both albums are all-original affairs that contain a dozen tracks programmed in back-and-forth fashion, but the end result differs a bit. The horns usually stood apart from Klein's piano, and each other, in terms of sound and intent; Skolnick's guitar and Kozlov's bass do not. Both men blend well with Klein and occupy a similar space in the music. This is a plus, in that Klein is able to create a more consistent state of mood and tone throughout, but it has a slight downside in that a sense of sameness becomes a bit too prevalent in the middle of the program.

Things start off in stellar fashion, with Klein and Skolnick working through "Exalted Kingdom," which could be mistaken for a McCoy Tyner tune if the tempo were ratcheted up and percussive force was added to the mixture; of course, it sounds great without those musical additives and alterations. Hints of Chick Corea surface on the Latin-tinged title track, which introduces the Klein-Kozlov combination, and things move along without a hitch from then on. Klein delivers some lighthearted piano work during "Dear Charles Mingus," turns reflective on the waltzing "Tea For Three," and brings out the tenderness with some help from Kozlov on "Inner Voice" and Skolnick on "In The Twilight Hours.." Clarity is ever-present throughout, as Skolnick's clean-toned lines ride comfortably over or within Klein's piano work and Kozlov's warm and occasionally guitar- like bass work adds a bit of weight to the proceedings.

Klein's Two Duos dates are, thus far, about one-plus-one rapport and intimacy, and both albums deserve high marks in these areas. It will be interesting to see what Klein does to change things up again for the third volume of the series. Perhaps vibraphone and piano partners will fit the bill for the next one.