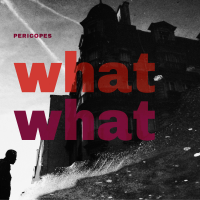 The sixth release from the duo Pericopes asks the listener to consider the scientific term rarefaction, or the reduction of an item's density. Like the rarefied air in the upper atmosphere or the spread of ocean waves as they reach the shore, their music is the converse of compression. This reduction is also evident in What What, where Pericopes have pared down from their previous +1 releases Legacy (Auand, 2017) and These Human Beings (Alfa Music, 2015) made with drummer Nick Wight.

The music is identifiable with that of several artists including Jan Garbarek, and the duos of Charles Lloyd and Jason Moran, and Rudresh Mahanthappa and Vijay Iyer. To liken the duo's sounds to the above players is also to say they have a distinct sound. Opening with "La Danse Des Holothuries," a sea cucumber, the chamber piece melds the haunting soprano saxophone of Emiliano Vernizzi with the semi-classical piano touch of Alessandro Sgobbio. The composition, like all the music heard here, is built on momentum and the accumulation of energy and its release. The pair are custodians of the pulse, trading that role throughout the recording. "Danza Di Kuwa" is out loud, modulating its pace from subdued to stratospheric. The two versions of "The Windmills Trail" might be the best example of the symbiosis of these two players and their music. Both tracks allow the players to entwine their individual instruments around the others in service of the melody. The music is so very intimate, it often feels like being a voyeur on a private conversation.