BY JEFF DAYTON-JOHNSON
April 2, 2011
Sign in to view read count 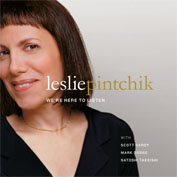 Pianist Leslie Pintchik's Quartets (Ambient , 2007) featured two innovations on the piano trio format. On half the tracks, the basic trio of Pintchik, bassist Scott Hardy and drummer Mark Dodge, was joined by saxophonist Steve Wilson, and on the other half by percussionist Satoshi Takeishi. The saxophone being what it is, the Wilson tracks tended to stand out. But the Takeishi tracks have arguably held more lasting interest. This is, after all, the instrumentation chosen by Herbie Hancock on his underappreciated Inventions & Dimensions (Blue Note, 1963), on which percussionist Osvaldo "Chihuahua" Martínez complemented drummer Willie Bobo. So it's good news that Pintchik has devoted the entirety of We're Here To Listen, the follow-up disc, to the double-percussionist format.

A highlight of Quartets was an improbably expansive treatment of "Happy Days Are Here Again." Stripped of its relentlessly upbeat hyperactivity, the number was transformed into something new, like a flashback scene in a movie, in which "Happy Days..." is playing in the background. This time round Pintchik does something similar with Bob Dylan's iconic "Blowin' in the Wind." Pintchik and Hardy create a pensive, circular harmonic figure to underlie the familiar melody. The classic protest tune comes off sounding not heroic and historical, but rather elegiac—akin to looking backward on a moment of uncomplicated political conviction through the prism of years of struggle and compromise. Perhaps Pintchik's intention was something else entirely: but this rich reading is strong enough to bear many interpretations. The melody of "Blowin' in the Wind" is echoed later in the disc on "Wabi-Sabi," lending coherence to the overall album.

The version of Bonnie Raitt's minor hit "I Can't Make You Love Me" is, if anything, better still: melancholy, neither too soft nor too hard, and with an added bonus, a fanciful Brazilian coda. The deliberate, can't-be-hurried pace is evident too on "In the Wrong Place at the Right Time," an impeccably-played blues with witty soloing by Pintchik.

The extra-percussionist format works a little differently here than on Hancock's 1963 Blue Note date: there, Martínez added depth and weight in the lower range, a quest for more bottom that would culminate in Hancock's associate Miles Davis's electric ensembles. On this disc, Takeishi's contributions are often felt more than heard, the action focused on the percussion instruments' membranes more than their resonating chambers.