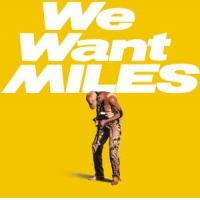 The audaciously titled We Want Miles has one of the more interesting histories in the catalog of trumpeter Miles Davis. Originally released by Columbia Records in 1982, it was not made widely available outside of Japan where it was recorded live in 1981. For those who managed to find it, it was both celebrated and vilified. This new reissue (with additional material) illuminates that debate. We Want Miles was the first live recording of Davis' return to music following a five-year health related sabbatical. His previous release, The Man with The Horn (Columbia, 1981), with un-Miles like pop orientation, was met with less than enthusiastic response by many.

Initially released as the Tokyo set of performances only, the bonus tracks edition of We Want Miles includes additional 1981 performances from New York and Boston and features the same band. "Jean-Pierre" opens the Tokyo set and Mike Stern's bluesy guitar drenched performance would be at home on an Alvin Lee album. It is notable for an absence of Davis who takes a back seat on this piece and makes Columbia's decision to include two versions of "Jean-Pierre" an odd one. Though We Want Miles is typically filed under jazz/rock fusion, it is less fusion and more of a trade-off between genres. It is Stern's presence in fact that influences much of the material's categorization. When the guitarist is in the lead, this is a rock album.

The genre-shift is evident with "Back Seat Betty" a composition more easily flagged as representative of the Davis repertoire. His presence here is stronger, his sound fuller though there is still a hesitancy that suggests Davis is struggling to find his form. It is one of the bonus tracks, "My Man's Gone Now" that stands out on many levels. Percussionist Mino Cinelu and saxophonist Bill Evans are among the exceptional solos that redeem the collection through this piece. Here Davis is the most within himself, interrogating his bandmates and directing the narrative with a command that plays more to his strength.

We Want Miles is an interesting and disconcerting collection containing some unquestionably great performances along with less than stellar moments. Legend has it that despite failing health, continued substance abuse and five years away from music, Davis was moved to return to the spotlight by the deaths of pianist Bill Evans and Charles Mingus. Always a searcher, it may be a blip on the radar that some of the early second-career efforts of Davis were small steps in his evolution. In fact, many of his subsequent albums such as Tutu (Warner Bros, 1986), Aura (Columbia, 1989) and Amandla (Warner Bros, 1989) were befitting conclusions to his great career. The enormous scope of the Davis catalog doesn't make We Want Miles a musical necessity; its value is more as a historical benchmark in Davis' evolution and, in particular, the later phase of his career.