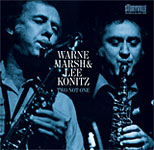 By this stage in their respective careers it was in many respects irrelevant that they had once been under the tutelage of pianist and educator Lennie Tristano. The assertion that this automatically made them members of the "cool" school seems as irrelevant as the assertion that their music doesn't swing and that they are somehow cold and lacking in feeling. Marsh cut "Blues In G Flat" on December 28, 1975 in a quartet setting and it's clear from this performance that he was more than capable of working the form in a manner both idiosyncratic and trenchant. It's on the third disc here and it captures the work of a man who had extraordinary affection for the form even while he was more than capable of preserving his own identity within it. All of his hallmarks are here, such as the slippery, sometimes indeterminate phrasing and the burnished quality that was characteristic of his work in the tenor saxophone's middle range.

Given the reputation both men enjoy amongst those of a conservative bent, the fact that they perform a couple of JS Bach's two-part Inventions as a saxophone duo would be deeply ironic if it wasn't for the fact that they pull it off with such aplomb. Clearly, both men had by this stage of their respective careers taken their interest in music as such to a point which for the time at least was scarce amongst jazz musicians. Happily their efforts, necessarily brief as they are given the nature of the pieces, are met with a delighted response from their Danish audiences.

On the last of the dates when those two pieces were recorded, the duo is backed by a Danish rhythm section that's so much more than the unassuming, quietly ticking Tristano ideal and the resulting interaction takes the music to another level. Pianist Ole Kock Hansen's work is a kind of amalgam of Cedar Walton's and Horace Parlan's, which might be more than coincidence as the latter spent a great many years as a Danish resident. The group is in full swing and in a fashion that might irk the purist in the closing out of "Just Friends," where the two saxophonists complement each other, as opposed to merely completing each other's phrases, in a joyous manner.

The first of two readings of "You Don't Know What Love Is" on the first disc finds Konitz in plangent form initially over Niels-Henning Orsted Pedersen's rippling bass, which in its neo-interventionist way again subverts the Tristano ideal. Such is the fecundity of the music making that the point is moot anyway, particularly as Konitz goes on to put out a manifesto on ballad playing as singular as anything out there. It's Marsh's turn on the second reading from the quartet date referred to above and he's both more wistful and more laconic. Phrases seem to drift upwards out of a different area of his consciousness in a manner that only goes to show how wrong—and indeed superficial—it is to lump the two men together musically. British guitarist Dave Cliff, a player whose work has been taken for granted for too long, is on potent and empathetic form on this one too, and the overall performance serves in the capacity of a benchmark.

Without stretching credulity too far, the same might be said for the entire set, not least because it could be argued that on the evidence here Konitz and Marsh were and are simply not subject to the vagaries of human existence which jeopardise the quality of improvised music. Whilst citing examples in support of that thesis in addition to the ones already discussed, Marsh on Charlie Parker's "Confirmation" on the fourth disc, and Konitz on his own "317 East 32nd Street" on the third, serve a certain utilitarian purpose—but that has no bearing on the fact that anyone with an interest in improvised music's ability to move should give this set the closest attention.

Tracks: CD1: Background Music; You Don't Know What Love Is; April; Kary's Trance; Subconscious-Lee; Back Home; Blues By Lester; You Stepped Out Of A Dream; Lennie Bird. CD2: Just Friends; Little Willie Leaps; Old Folks; Au Privave; Wow; Kary's Trance; Foolin' Myself; Sound-Lee; Chi-Chi; Two Part Invention No.1, Allegro; Two Not One; Darn That Dream . CD3: 317 East 32nd Street; Two Part Invention No. 13 Allegro Tranquillo; April; Everything Happens To Me; Blues In G Flat; After You've Gone; The Song Is You; Lennie Bird; It's You Or No One; God Bless The Child; The Way You Look Tonight; Without A Song; Be My Love. CD4: You Don't Know What Love Is; Lennie Bird; Confirmation; I Can't Give You Anything But Love; Without A Song; Just One Of Those Things; All The Things You Are; I Should Care; The More I See You; When You're Smiling; Taking A Chance On Love; Little Willie Leaps; Every Time We Say Goodbye; I Want To Be Happy.