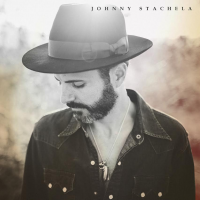 Los Angeles-native Johnny Stachela may be a Southern Californian, but he is one tempered by the Allman Brothers Band and baptized in Southern-fried Dixie. Influenced by the music of the late '60s and early '70s, Stachela presents himself as his own artist on the present EP Walk Through Fire. Stachela updates the Southern Stomp of the '70s with a practiced precision that incorporates all of the evolution in rock music since that time. Where The Black Crowes reminded us of how good the Rolling Stones were, Stachela assimilates the whole of the southern rock experience into a form that transcends what came before without forgetting it.

The EP is necessarily a sampler. All six of the songs included on this recording bear differing personalities. The opening "Hard Rain" begins with a whiplash guitar lick eased into some Robert Cray soul. The title cut is a nuclear shuffle built again on a corrosive riff full of funk and invention. Stachela is an accomplished guitarist with a fat, round, overdriven tone that is muscular and rippling with electric accuracy. He is a fine slide guitarist as is demonstrated melodically on the ballad, "You're Not the Only One." He takes that well-behaved slide guitar, injecting it with the devil, achieving the crunch of "Dead Man Rising."

Stachela's depth is illustrated on the two instrumentals. "Twilight Nebula" would be an outlier on this recording had the Allman Brothers and Gov't Mule not produced such ethereal music. The disc highlight is the jazz-infused "Paris." Stachela studied Dickey Betts hard, assembling an instrumental that recalls "In Memory of Elizabeth Reed" and "Kind of Bird" at once. If this recording has any faults, it is that there is so little of it. Let's hear more, Johnny Stachela.

Hard Rain; Walk Through Fire; You’re Not the Only One; Twilight Nebula; Dead Man Rising; Paris.