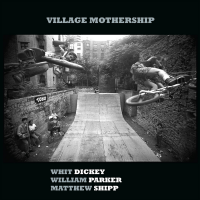 If drummer Whit Dickey, bassist William Parker, and pianist Matthew Shipp were a rock band, we might expect them to cover their classic album Circular Temple (Quinton Records, 1992) an LP, later re-released on the Infinite Zero label in 1994. Of course they are not a rock band, but If they were, we probably would demand they perform the music on Circular Temple in the exact same manner as it sounded three decades earlier. But that's just not the way improvising artists operate. They grow and their music ripens as they collaborate together. These three have indeed combined for many concerts and recording sessions, their work in the David S. Ware undoubtedly comes to mind.

Back in the day, you might have first thought this trio was a rock band because that reissue of Circular Temple was on former Black Flag frontman Henry Rollins' label, which he co-founded with Rick Ruben of Beastie Boys fame. The liner notes to that reissue even asked "Is this jazz?" A proper question to ask because, remember in 1994 we were in the heyday of neocon jazz, where the anointed young lions were paring down the jazz canon. It was their "we will not be replaced" (by innovative music) moment. As with seemingly all conservative movements, the young lions have hoisted themselves on their own musical petards.

So what do we have thirty years later? Village Mothership is a vibrant and resonant recording that is as much jazz as it is not jazz. It is three freewheeling, co-equal musicians improvising, pulling music out of thin air. Correction, not out of thin air, but music drawn from decades of interaction and exchange. Where thirty years ago listeners struggled to identify Shipp's influences, often citing Cecil Taylor, Lennie Tristano, Andrew Hill, plus Debussy, today we acknowledge the musical lexicon that is Matthew Shipp's music. Combining the pianist with two other free spirts, music happens albeit outside traditional roles for their respective instruments. Dickey's drumming is expressed quite often as commentary, as he is in conversation with Parker and Shipp. The solo he opens the title track with is prayer-like, pausing as if he were a horn player taking a breath. When Shipp and Parker join, there is a rush of sound as if the trio was capturing a horse that has broken through a fence. Once collared, they ride that horse with a kind of loosened swing. Elsewhere the quiet meditation of "Nothingness" opens into an ever expanding universe and the introspective "Nothing & A Thing" pulls that universe back into a grain of sand.

A Thing & Nothing; Whirling In The Void; Nothingness; Village Mothership; Down Void Way; Nothing & A Thing.