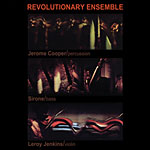 The release of this 1971 recording of Revolutionary Ensemble's Vietnam ought to have a special significance. Two wars are being fought, and the children of many families are being put in harm's way. The "stamping out the terrorism" that violently assaulted the USA provides justifiable reason for conflict. Still the specter of Vietnam looms large. Almost 50 years after the event, the word "Vietnam" sends chills down the spine. So much more when the horrors of that conflict are brought to life by the dark magic of music.

This extraordinary, album-length composition by percussionist Jerome Cooper, bassist Sirone and violinist Leroy Jenkins would have likely passed like a ship in the night, had it not been for the fact the recording has been rereleased by ESP-Disk. It is hard to imagine why it was not first greeted with more fanfare upon its original release, but perhaps the world of art was much crueler towards modern musicians. The music on Vietnam rises like a primordial wail and growl from the guts of Jenkins' violin and Sirone's bass.

These pure screams echo the war bugle and groans of men and women at war. The ululation of strings mimics the chilling whine and drone of air-raid death. Cooper's furious playing, punctuated by brash splashes and judicious "pings" on the cymbals—especially in the first part of the composition— brings the "rat-a-tat" of small arms fire to life. While the violin invokes the spirits of the victims, the bass recreates the aggressor, and the percussion makes for a nightmarish historical backdrop.

The musicians' sense of history is acute. Essentially, this is an interpolated blues composition, with a timely reminder of other American musical traditions. For instance, Jenkins often brings Cajun accents to bear in his fiery bowing. Sirone's mournful pedal point provides powerful contrapuntal coloration. The language of the strings is somber yet beautiful, and the tone is always questioning in both sections of the piece.

The solos are memorable. About 15 minutes into "Vietnam 1," Sirone's playing begs the question why he was never appropriately recognized for his virtuosity. The bassist first strums furiously. Then, while Cooper brushes his cymbals reverently, Sirone plays bass as Jimi Hendrix played guitar, with violent and gut-wrenching sadness. Jenkins is never far away, with an ascending cry of his own. Cooper's dark clunks and thuds on the bass drum, and fibrillating rolls on snare and toms, complete the macabre musical interpretation. "Vietnam 2" offers merciful resolution. Cooper is particularly brilliant with subtle changes in shading, adding bells to the soundscape, evoking Vietnamese stoicism.

Vietnam is a staggering composition; an epic lament of two peoples and the world at war. If it was not recognized as a major contribution in 1971, that fact ought to be reconsidered today. Although not orchestral in rendering, the composition is evocative of Mahler's glorious Ninth Symphony.