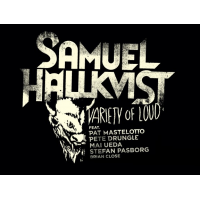 Copenhagen-based Sweish guitarist Samuel Hällkvist, winner of the prestigious 2010 Jazz In Sweden award, demonstrated his eclectic tastes on his 2010 debut as a leader, Samuel Hällkvist Center (Caprice), albeit still rooted in the jazz legacy. On Variety of Loud he even goes further, blurring genre boundaries between improvised jazz and his primary love for the turbulent energies of John Zorn, progressive rock, metal and electronic, while impressively juggling muscular, punchy delivery and sophisticated improvisations. Hällkvist calls his new hybrid style "asymmetrical dance music."

Hällkvist has enlisted an international cast to enhance his vision, including King Crimson drummer alum Pat Mastelotto, Danish drummer Stefan Pasborg, Ornette Coleman alumnus keyboardist Pete Drungle and Japanese performance artist Mai Ueda who adds vocals. None of the musicians met the others in person; music files were shared via the internet and the only common denominator was Hällkvist, who assembled their contributions into an intricate, nuanced canvas of rhythms and colors.

All nine tracks are based on the complex, driving rhythms that the two drummers deliver—some electronic or processed—and over these layers, Hällkvist construct melodic themes with his guitars, using Ueda's wordless voice as another instrument. The heavy, trance-like beats dictate the character of "Kill the Road," "The Maraca Triplets" and 'Ain't Renegade."

Elsewhere, the rhythms emphasize the guitarist's role. Processed beats gently encompass the soft, twangy lines of Hällkvist guitar on "Swarm Robotics" His various sounds—acoustic and electric, bluesy and metallic—weave the schizophrenic, infectious texture of "2nd Sunset," where the percussive sounds are pushed aside.

"Radio Waits for No One" is built like a mini prog-rock suite, with a dramatic, dark narrative, intensified by the processed sounds of the drums and guitars, spacey keyboards and muscular playing from all the players. On the addictive "Body Avalanche" and "Wigwam" Hällkvist fusion of country-like and rock fretting soar over the focused rhythmic palette. His fascination with a kind of futuristic twangy fretting is also evident on the addictive sing-along, "Urban Champion."

Hällkvist is a musician with a unique vision.