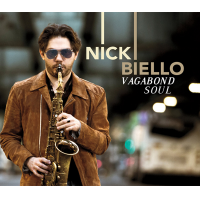 Alto and soprano saxophonist Nick Biello has been gaining momentum as an artist on the New York scene in the late 2010s, culminating in this recording for Truth Revolution Records, Vagabond Soul. His prodigious talent as an instrumentalist, composer and arranger is plainly on display on this significant offering, as it is on the myriad of recordings he has made as a side musician. His partnership for this recording with pianist Phil Markowitz is a true sign of the respect he is earning from veteran and young players alike. Markowitz has spent the past 16 years playing, touring, and recording with saxophone master Dave Liebman, as well as performing with saxophone icons Ravi Coltrane, and Joe Lovano.

Mainly a practitioner of the alto, Biello's sound, approach, and articulation seems more to point in the direction of tenor giants such as Sonny Rollins. While he possesses the unabashed relentlessness of fellow alto master Gary Bartz, Biello's sound falls somewhere in between that implacable vision and the ardent spirituality of John Coltrane. High praise, but he cannot simply be sequestered in the alto community so dominantly adherent to Charlie Parker and Cannonball Adderley.

Biello is also an enthusiast of creating sonic soundscapes and orchestral washes with synthesizers, as is plainly evident on the opening salvo, "V-Ology." This opener however, is not quite indicative of what is to come, with Biello's synth arrangements surrounding, and at times absorbing, the ambient communal sound of the band. The virtuosic level of play, however, is consistent throughout the recording.

The band enters true light on Biello's "Grandparents." Pianist Markowitz offers a devastating solo that is pure jazz expressionism, drawing to a release that emerges into a fine solo by guitarist Andrew Renfroe. Biello's solo is front and center an accurate marker of his playing style, whether witnessed through recordings, or more significantly in live performance. While he tends to play a lot of notes, his long tones express a lamenting cry that again, is more reminiscent of the titans of tenor. Indeed, this acorn seems to have dropped from something other than the traditional alto tree. Biello goes his own way, and has the chops to back it up. The result is an individual, identifiable sound of his own, something close to unattainable at this point of the jazz lineage.

It should be mentioned before venturing any further, that drummer Clarence Penn is the driving force behind the music of Vagabond Soul. His charismatic dynamicism drives the band, but allows himself as well to be a colorist, enabling exciting things to happen within the music. He creates an ambience that feels alive, and is full of energy and passion.

On "Piccolo," Biello adds violist Vincent Lionti to the mix, with interesting results. Biello enters the fray on soprano, supporting a weaving, dynamic melody line accentuating by the rich, dark tonality of Lionti. The two operate within a similar tonal range, yet are separated vastly in terms of sound and light. The beautifully constructed melody, seems to be written perfectly with the viola in mind. The piece certainly alleviated any fears about the brief change-up of personnel. So often, artists who don't record often, and most jazz musicians fall into this category, seem to try to represent every facet of their current status on a recording. In doing so, it seems to ignore the more traditional concept of making an album. Biello tweaks things a bit here and there, but maintains the integrity of thought behind making a recording that is rich in color, and expresses fervently his ardent virtuosity.

"Dark Energy" features a quartet without a chordal instrument. Biello teams up with tenor saxophonist Paul Jones, bassist John Benitez, and drummer Penn in a rollicking romp that flows through a gauntlet of intricate rhythmic variances, and melodic interludes. If this tune was the opener, it likely would create disappointment that the entire record wasn't allowed the magic of these four musical souls bearing all in this rhythmic and tonal free for all. The Biello/Jones combination is eclectically intertwined, weaving gently, then aggressively through a loose harmonic structure put down by Benitez and Penn.

The standard "You Stepped Out of a Dream, " gives us the opportunity to hear Biello's playing within the jazz tradition that has carried forward to this time and place from when the tune was written in 1940-in other words, in the post-bop lineage. The elegant simplicity of Markowitz creates a harmonic flow that allows Biello to express his inventive approach to improvisation, employing a devastating impressionism that leaves the mark of jazz adventurism that has gathered momentum for some 75 years. It allows the listener to connect the dots historically between Biello and the eclectic historical context left behind by the masters of the genre. Plainly, Biello stacks up well with any historic player you want to name.

Very easily, the value of a recording like Vagabond Soul can be relegated to the irrelevance and vaguery of a multi-faceted jazz album that acts as more of a snapshot of an artist, than a well conceived album expressed from a particular theme. His sound is inventive, his technique flawless, these are definitive traits. But great music, and great musicians cannot fit into any notion that is absolute, or "definitive." There must be an open-mindedness to jazz in order for it to facilitate true modern jazz expressionism. Vagabond Soul does just that.