BY ANDREW LUHN
October 9, 2016
Sign in to view read count 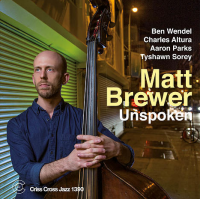 Bassist Matt Brewer first revealed his talents as a bandleader and a composer on his 2014 Criss Cross debut Mythology. Brewer returns to the Criss Cross label for his sophomore effort with a completely new quintet to explore seven new original compositions, a Bill Frisell cover, and one Charlie Parker tune. Joining him this time around are tenor saxophonist Ben Wendel, guitarist Charles Altura, pianist Aaron Parks, and drummer Tyshawn Sorey, all of whom have previously recorded as sidemen for Criss Cross releases but are hardly label regulars.

As with Brewer's first album, the defining feel of the music seems to be loose, pastoral balladry played with an adventurous and spontaneous spirit, but also admirable restraint. The title track is a good example. Brewer says that the piece was inspired by his love of Brazilian music (particularly that of Milton Nascimento). The piece unfolds slowly with a delicate melody floating overtop the arpeggiated three note voicings and gradually gains momentum and energy before a sudden shift to sparseness for Brewer's melodic bass solo. Altura and Parks deserve praise for their impressive co-operation, managing the difficult feat of playing simultaneously but never getting in each others' way. The band works marvelously well together as a whole unit, and many of the tracks take a similarly restrained approach, letting the group work as a unit to determine the path of the music.

"Evil Song" takes a more overt approach and opens with a fittingly sinister-sounding bass line and a somewhat sarcastic march feel from the drums. As Wendel and Altura state the melody in unison, Sorey's drumming becomes busier and more frenetic, allowing all the players to take more liberties while still referencing their written lines. The inclusion of a Charlie Parker blues head may seem odd at first in the context of the album, but of course Brewer adds his own twist. The tune opens with improvisation and each solo becomes gradually more abstracted over the tight swing feel. Brewer holds down a solid walking line, allowing Sorey to engage with the soloists for some captivating interplay and the familiar Charlie Parker melody isn't revealed until the very end.

With this second release, Matt Brewer re-affirms his status as a noteworthy bandleader and composer, and this quintet works together exceptionally well to interpret his music tastefully. Brewer's compositions often favor ambiguous harmony and twisting, protracted melodies that at times can become somewhat shapeless and vague, but generally serve as interesting canvases for the group's improvisations. The band's approach is often restrained and subtle, but close listening will reveal the intricate synergy of the group and their mature approach to group improvisation. Overall, the album succeeds as a new chapter in Brewer's developing compositional style.