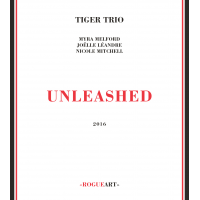 Three leading exponents of their instruments unite on Unleashed. Since their first collaboration in Vancouver in 2009, French bassist Joëlle Léandre and American flutist Nicole Mitchell have enjoyed a simpatico outlook, as evidenced by a clutch of Rogue Art releases including Before After (2011) and Sisters Where (2014), as well as Flowing Stream (Leo, 2014). Joining them on this occasion, pianist Myra Melford fully buys in to the freewheeling collective approach aired in a Paris gallery in early 2016.

So what's tigerish about the date? Well maybe the fierce dedication to unfettered personal expression and carving out one's own path. But there's nothing remotely competitive about the way in which the three women combine across the ten cuts, which include three duets covering all the possible permutations. While both Mitchell and Melford may be better known as composition-based improvisers, they prove the equal of Léandre on the off-the-map navigations which are the Frenchwoman's home turf. Together they create a pleasing sonic spectrum stretched between Mitchell's upper register excursions and Léandre's in the gut lows, mediated by Melford's keyboard.

From the keen give and take between Léandre's elastic resonance and Melford's tightly sprung figures on "Freezing Rain" to the uneasily reflective interplay of "Bright Sunshine," their astonishing musicianship shines through in the selfless three way investigations. Léandre's wonderful tonal command and fluidity manifests throughout, showing a seamless transmission from synapse to sound. Mitchell showcases her control of harmonics with wobbly vocalised overtones at the start of "Dust Storm," matched by Léandre's hovering arco. Later when Melford picks up on Mitchell's flute stutter with a tremolo of her own, it provides a classic example of how the pieces evolve through quick listening and rapid responses.

Melford establishes the template for several of the numbers. Her restless introduction sets the terrain for "Lightening": urgent, determined and inquisitive. Breathy flute swooshes and massaged piano strings conjure some ethereal weather on "Thick Fog," the most playful of the duets. They are at their most animated in "Hurricane," where Melford's thick wiry runs hint at an affinity with Cecil Taylor, before exploring the contrast between Mitchell's long lines against the rapidity of Melford and Léandre's interaction, by way of some almost bluesy inflection by the flutist which find an echo in the pianist's oblique chording.

The nearest they come to meeting the expectations which the instrumentation might suggest is in the extemporized chamber trio exchange of "Dazzling Snow," but by that juncture they've well and truly made the point that in the right hands color, drama and invention need no script.