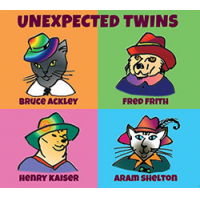 Sometimes looking back can be a cause of regret, but it can sometimes inspire. Happily the latter is the case with Unexpected Twins by the doubled instrumentation of guitarists Henry Kaiser and Fred Frith and saxophonists Bruce Ackley and Aram Shelton. The original Twins emerged from the early free improvisation scene in North America in 1977, and featured guitarist Eugene Chadbourne and saxophonist John Zorn (before he was John Zorn), alongside Kaiser and Ackley. Four decades later, the latter pair decided to revisit the general approach and some of the repertoire, culminating in this terrific studio session.

Each of the current and former members contributed a chart, with a collective improv and a Steve Lacy cover completing the 75-minute program. The range of sources produces a wide variety of engaging outcomes. Some are clearly conventionally notated, like Chadbourne's "Shreeve" numbers which bookend the program, their jerky free-bop opening out to busy give-and-take, though always with an ear on the theme. "Bound," one of the loveliest tunes in Lacy's book is accorded a mournful, elegiac rendition with restrained murmuring extemporization, while a folkish refrain also launches Shelton's "This Reminds Me."

Other tracks more resemble structured improvisations; Kaiser's "Court Music" proceeds in stately overlapping phrases, starting lyrical but gradually becoming more extreme. It reaches its apogee when its author cuts loose with motor bike revving fuzz guitar, while the others continue on their measured way, showing that humor is also an essential component in the mix here. The Twins afford Zorn's "Curling," one of his game pieces where improvisation is subject to certain rules, a 20-minute outing which is full of whinnying, hiss, chuntering, beeps, creaks and burbles, before turning more sweet.

Kaiser's outburst, already mentioned, constitutes one of the few moments that might be construed as solos on the disc. Although ROVA founder-member Ackley's "Emit Time" offers brief cameos, they are quickly subsumed into a fast-changing series of duet and trio permutations. But whether it is individual or group interchange which predominates, with the advanced guitar and saxophone concepts embodied by the Twins the results are always fascinating and demonstrate the ongoing vitality of the late-'70s wellspring.