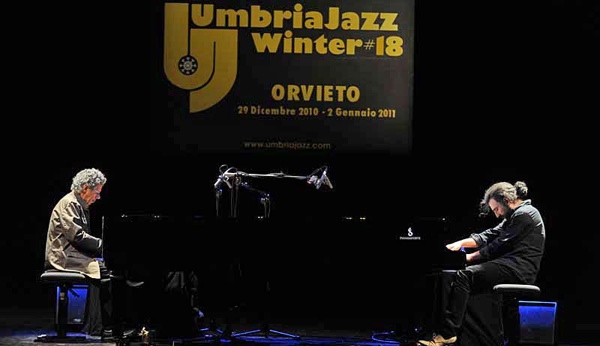 The opening concert of this kermesse was a pearl of these heterogeneous artistic projects, one of a three concert series starring Chick Corea and Stefano Bollani. The piano duo played in the suggestive setting of Orvieto's Neoclassic Teatro Mancinelli, and the audience's excited appreciation of these two piano masters was also filled with the exquisite pleasure of knowing that its applauses and explosive shouts would result in a live record, produced by ECM.

From the very first notes of Antonio Carlos Jobims "Retrato em Blanco e Preto," it was evident that this performance's alchemy would be enhanced by the uncannily complementary nature of both pianist's identities. The musical and personal encounter assumed the shape of a meeting between a Zen monk (Corea) and a butterfly (Bollani). Corea's crystalline sound and meditative choice of pauses was counterbalanced by Bollani's surrealistic sparks, both on the piano and outside of it; tapping on the instrument's frame and dancing with happy feet while playing have both become familiar elements of the Italian pianist's energetic, yet always surprising style.

In an evening repertoire intertwining Brazilian classics (including Astrud Gilberto's "Doralice" and Jobim's "Este Seu Olhar") with improvised blues, American standards ("Darn That Dream," "If I Should Lose You") and original compositions (Corea's "Armando's Rhumba" and Bollani's "Avalsa Da Paula"), the two virtuosos displayed an incredibly harmonious capability of maintaining clearly identifiable personal traits even while playing obbligatos. When Corea sounded like the first rain of March, Bollani would reply with the more percussive tickling of a growing summer storm.

As Corea pointed out in the backstage, one of the most interesting definitions of aesthetics links the philosophical concept to both physical and emotional pleasure. A similar standpoint was particularly evident in the naturally pleasurable equilibrium of the different, yet perfectly balanced, ballets of dynamics displayed by these two pianists. Both musicians even mockingly referred to the mirror-like nature of their interpretations, when Corea showed the audience a score that a smiling Bollani argued to play sideways.

The morning of the second day in Orvieto started with a very peculiar reminder that women in jazz are a leading force. Dee Alexander, with her Evolution Ensemble, (featuring violinist James Sanders, bassist Junius Paul, drummer Yussef Ernie Adams and cellist Tomeka Reid —with whom Alexander also shares a place inside the AACM) opened the morning with a brilliantly vital performance. 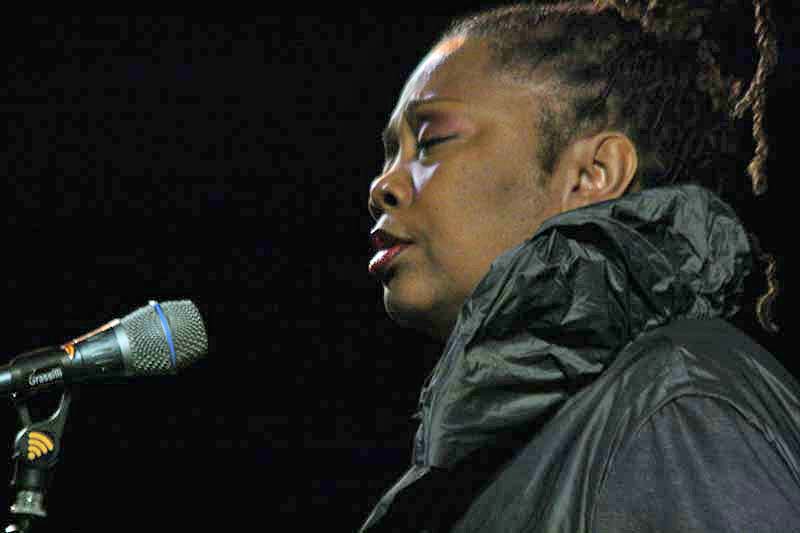 As movingly highlighted by Alexander's comments throughout the whole concert, the aim was to present a series of compositions by Chicago-based jazz musician and composer "Light" Henry Huff, a key mentor and inspiring figure in the singer's life, who prematurely died in 1993. The tribute, far from assuming the mournful tones of a musical eulogy, introduced the Italian audience to the bubbly and up-tempo nature of Huff's canon, including "Live," "Happiness" and "Truth Will Set You Free."

Alexander's voice showed all its majestic range. She moved from a cocorito-like trill to the delicate pianissimo of an opera specialist, to the syncopated changes of rhythm of an experienced scat singer. Around her, Sanders swiftly accompanied her with violin variations of a definite Latin matrix, while Reid and Paul skillfully alternated pizzicatos and bowed, long-held notes. Adams enriched the whole with passing from the metallic sonorities of the wind chimes to the wooden ones of the drumsticks, which proved particularly evocative of nature's sounds in "Spring Thing."

Towards the end, an extremely moving composition by Alexander, "See You on the Other Side," was filled with her heartfelt gratitude towards Light, who taught her "how to use my voice as an instrument, the way I was meant to."

Danilo Rea's performance at Umbria Jazz Winter similarly follows the lines of homage, in this case to Italian singer, composer and poet Fabrizio De André. The latter has long been identified as Italy's Brassens, for the satirical and politically engaged nature of many of his songs. Yet, another côté of his production includes romantic ballads of love's labors, and a lyrical intensity which revealed his poetic mastery.

Rea's tribute, previously recorded during a session at Schloss Elmau— Piano Works X: Danilo Rea at Schloss Elmau, A Tribute to Fabrizio De André (ACT, 2010)—embraced and highlighted both these characteristics from De André's canon, without failing to welcome the audience with the pianist's own identifiable syntax. Rea, in fact, exploited the lowest notes on the piano with rare skillfulness, and his instrument, raptured in sumptuous crescendos, almost acquired the sound of a Cathedral's organ. 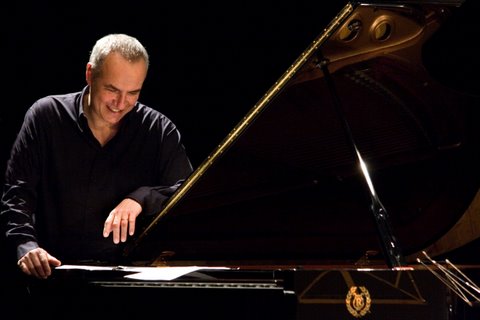 Rea's style constantly reminded the audience that playing the piano is a physical act, though he never overdid his climaxes. Equally, he often surprised his listeners with the delicacy of his dreamy pianissimos, as in "Canzone di Marinella," De André's melancholic song dedicated to a youth beauty, found dead in a river during the spring time. Rea's arrangements and passionate interpretations faithfully reproduced, on the piano, the palette of emotional textures which dominate De André's songs, giving shape to a memorable piano solo.

One of the most interesting aspects of Umbria Jazz (both summer and winter editions) is that it becomes the theatre of original project which mix musicians from highly different backgrounds. Most of the times these formations end up with fostered friendships, and in some cases they sparkle into ongoing collaborations and innovative recordings.

This is what happened with saxophonist Rosario Giuliani, vibraphonist Joe Locke and pianist Dado Moroni's Stepping on Stars (Egea, 2010). The trio, performing for the first time together at Umbria Jazz 2009, recorded an album featuring original compositions from each of its members. The result is an extremely smooth work which brings together the skillful interpretive and compositional signatures of all these musicians.

The trio's performance at Umbria Jazz Winter followed the same pattern, enriched by live variations stemming from an atmosphere of joy and friendship which ran throughout the show. In "My Angel," the peculiarly liquid nature of Giuliani's alto sound was heightened by Locke's and Moroni's pianissimos. Giuliani just won Musica Jazz's readers' poll as best saxophonist, and each of his phrases confirmed his public's high expectations.

On the other hand, "Brother Alfred"—Moroni's composition dedicated to McCoy Tyner—clarified how this leading pianist masterly exploits the percussive nature of the piano keys, without losing the extremely sharp melodic texture in all his passages. A highly experienced and technically piercing musician (in 1987, at age 25, he was already a judge of the Thelonious Monk Competition), with a brilliant flair for irony, he turned every change of rhythm into a playful opportunity.

Locke's "Sword of Whispers," a tribute to Jimmy Scott (whose style was once described with the same words by The New York Times) disclosed the metamorphosis of Scott's whispers into Locke's vibraphone dynamics. In this piece, Locke was particularly sensitive in maintaining the metaphor by not letting his beats blast till the very end. A self-declared passionate for good English writing, Locke applies the same philosophy of the elegant choice of musical vocabulary on his own instrument.