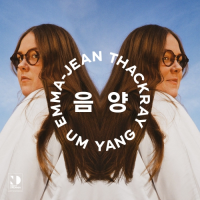 Right now, in summer 2020, using new and recent releases as the yardstick, the two most exciting musicians on London's alternative jazz scene are trumpeters. One is Laura Jurd, whose recent To The Earth (Edition) is a high-water mark for her electro-acoustic band, Dinosaur. The other is Emma-Jean Thackray, whose EP Um Yang is also remarkable. Jurd is the longer established musician, having released three albums with Dinosaur since 2016. Thackray's first release came two years later, and she has yet to put out a full-length album, but her work as a DJ on Worldwide FM has boosted her profile.

So far, everything Thackray has released has been adventurous and thrilling. Her music, which combines electric-era Miles Davis with new millennial electronicism, free improv with groove and cerebralism with visceralism, is in a state permament evolution and Um Yang is a further step forward.

The EP is a two-track affair with a running time of 19 minutes (not counting the radio edits). Um yang is the Korean version of Chinese Taoist yin yang, and the two tracks are structured on that basis, effectively working as mirror images of each other. The slightly longer "Um" starts like an out-take from Davis' In A Silent Way (Columbia, 1969), before morphing into an entrancing drums and percussion groove which is totally 2020. The track steadily builds in intensity, with saxophonist Soweto Kinch, on tenor, growing increasingly far out. "Yang" opens with thirty seconds of noise that might have been created by saxophonist Albert Ayler and trumpeter Donald Ayler for ESP in the early 1960s. Kinch, on alto, once more leads the ensemble, but this time in the opposite direction, towards a (shhh/)peaceful conclusion.