By JOHN EYLES
February 26, 2012
Sign in to view read count
Alex Ward originally came to prominence as an improvising clarinetist when he played at Derek Bailey's Company week in London back in 1988. But since 1997 he has also enjoyed a rising profile as a guitarist in ensembles including rock band Camp Blackfoot, the poppish instrumental group Pocket and improvising trio NEW (with Steve Noble on drums and John Edwards on bass). In 2002 he began writing songs, leading to his solo album Hapless Days (Copepod, 2005) and the band Alex Ward & the Dead Ends. Subsequent bands have included Dead Days Beyond Help and, since then, Predicate.

Alongside those guitar-based activities, Ward has remained highly active and successful as an improviser on clarinet. His solo clarinet album Cremated Thoughts (Treader, 2008) was much acclaimed, as was his recent duo album Old Sights, New Sounds (Incus, 2011) with saxophonist Lol Coxhill.

So, as well as playing two contrasting instruments to a very high standard, Ward effortlessly straddles the divide between improvisation and composition, playing other musicians' compositions as well as his own. On one memorable occasion, Ward was playing at an album-launch gig with guitarist Duck Baker when Baker called the American folk song "Shenandoah." Ward launched into it without batting an eyelid, playing an atmospheric and affecting version note-perfect, complete with improvised variations.

Ward's two most recent album releases display the contrasts between these seemingly disparate but complementary sides of him, together highlighting the breadth and depth of his talents. 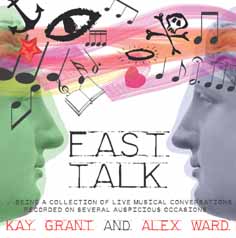 Fast Talk pairs Ward on clarinet with vocalist Kay Grant. It consists of ten tracks; eight are concert recordings from four separate performances at different improv gigs in London between February 2008 and June 2010; the remaining two are live studio recordings made in April 2011. The album is subtitled "being a collection of live musical conversations recorded on several auspicious occasions." While there is a flippant tone to that subtitle, it emphasises two important points about these duos—they are live and they are "conversations." Well, they are probably most like the conversations of a long-married couple who both talk at once, finishing each other's sentences and occasionally contradicting or explaining what the other one meant. Fast Talk in fact, rather than a leisurely dialogue.

The album amply displays Ward's talents as an improviser, with Grant being an ideal partner. As the dates of the recorded gigs indicate, the two have plenty of experience together and so know each other well. Both are inclined to improvise melodies and are adept at doing so. Grant's wordless vocals complement Ward's clarinet well, with the two shadowing one another. They frequently occupy similar parts of the frequency spectrum as they rapidly respond to each other's tones and rhythms, sometimes overlapping or momentarily coinciding so their two separate voices become as one.

On three tracks Grant employs electronics to process her voice, sometimes moving it away from the range of the clarinet. Even as two very distinct voices, clarinet and vocals still intertwine, circling and mirroring each other to stunning effect. 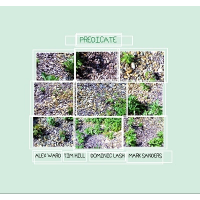 Played back-to-back, it would be difficult to identify that Fast Talk and Predicate had a musician in common. Ward formed the quartet Predicate with the aim of combining his compositions with improvisation. As he says, his choice of instrumentation offers a clear delineation of rhythm section (Dominic Lash on double bass and Mark Sanders on drums) and lead instrument (Tim Hill on saxophones), allowing Ward's guitar to sit in between. As a free improvising quartet, that line-up would be impressive, but instead they are playing Ward compositions with ample room for improvisation.

Right from the opening of "The Denied," it is obviously not improvised, as Sanders and Lash play a carefully constructed intro of tom-tom and cymbals plus bowed bass to generate a dramatic atmosphere. They are soon joined by sustained sax notes from Hill which maintain and build that atmosphere further, in a way that verges on cinematic.

In complete contrast, "Courtesy Class" opens with a propulsive ensemble riff, driven by bass and drums, which leads into a prolonged saxophone solo which builds and builds until Ward lets rip with an equally energy-charged guitar solo, after which the temperature cools a little. Next up, "Stub" follows a similar pattern, with powerful saxophone and guitar solos both stealing the limelight before a brief Sanders drum solo rounds things off; its structure is closer to jazz—theme, solo, solo, solo, reprise—than to improv.

Throughout, the quality of Ward's guitar playing makes it obvious why he wanted a band to showcase it. However, Predicate is a quartet not a one-man band; Hill's solos repeatedly match up to Ward's, while Lash and Sanders are in top form, the engine of the band. All four players contribute to a fine album which looks set to stand the test of time. Ward says he hopes to write many more pieces for this quartet and to work with it for much time to come. Amen to that.

Tracks: May I Have This Dance; And Another Thing; Consider the Alternative; Wood for the Trees; Salisbury Blues; You Don't Say; Thin Ice; Tale of Two Heads; Absolutely (Not); Take the Scenic Route.