By MARK CORROTO
August 2, 2010
Sign in to view read count 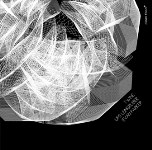 Twine, from saxophonists Evan Parker and Urs Leimgruber, is perhaps named for two strands twisted together to make a much stronger thread. The subtitle, however, might just be two saxophonists separated at birth.

Most people familiar with the legendary Parker know his unique sound and reign as the sovereign of freely improvised tenor and soprano saxophone. He has worked in just about every combination from thrilling solo performance to his large Electro-Acoustic Ensembles.

Swiss-born Leimgruber is less well-known; a player with all Parker's tools and eight years his junior, the saxophonist has recorded with the likes of Christy Doran, Fredy Studer, Marilyn Crispell, Joëlle Léandre, and as a solo artist, and can be heard on Chicago Solo (Leo, 2010), Albeit (Jazzwerkstatt, 2010) and with OM on Willisau (Intakt, 2010). The pair might not have been separated at birth, but they are certainly brothers of the same mothers.

Parker is now famous for his duo performances with Joe McPhee, Anthony Braxton, Steve Lacy, and Lol Coxhill. With Leimgruber, he finds a near perfect DNA match. The pair trades what may be considered Parker-patented flutters, overtones, high-pitched banter, and low swats. Distinguishing one player from the other is difficult as both speak the same language.

The three longish pieces deliver endless fascination. "Twirl" begins with a high register exploration that could easily be a call-and-response from exotic birds. Played until exhaustion, the piece resolves itself with an ornithological silence. Both "Twist" and "Twine" involve interplay and conversation instead of competition. Neither saxophonist chooses to shout to make his point. An astounding recording.