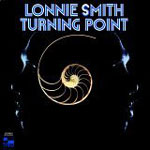 When Hammond master Lonnie Smith recorded this set for Blue Note in 1968, he was better known as a supporting sideman on performances and recordings by (among others) George Benson and especially Lou Donaldson; some of Sweet Lou's best recordings, including Alligator Boogaloo, Midnight Creeper, and Everything I Play is Funky, feature Smith's supple Hammond grooves.

Other musicians must have found Smith's musicianship worthy of respect, for this session convenes a gathering that's the perfect snapshot of the classic late-1960s jazz-funk ensemble: Bennie Maupin (tenor sax), Julian Priester (trombone), and Lee Morgan (trumpet) in the front line, with guitarist Melvin Sparks and drummer Idris Muhammad smooth in the pocket.

Now remastered as part of Blue Note's Rudy Van Gelder (RVG) reissue series, Turning Point is just the set to bridge the gap between the soul-jazz organ style of Jimmy Smith and the jazzy soulful organ style of Booker T. Jones with the MGs.

The party begins with the opening "SeeSaw, originally a hit for Aretha Franklin, written by legendary pop/R&B songwriter Don Covay and guitarist Steve Cropper of the aforementioned MGs. Title notwithstanding, its opening bars are James Brown's "Papa's Got a Brand New Bag, and barely disguised at that, and its bridge cops from Rudy Clark's soul classic "The Shoop Shoop Song (It's in His Kiss).

The Beatles cover "Eleanor Rigby also swims in soft psychedelic blue, quite like the various (and very successful) organ-groove Beatles covers by Booker T. & the MGs, as Smith paints in the melody and the horns sing counterpoint in rich, colorful brushstrokes. The horns sit out on "People Sure Act Funny, a Sparks/Smith shootout and, thanks to Muhammad's tight timekeeping, a masterpiece of understated soul/funk/jazz.

Nearly perfect for this stellar collection of soul-jazz stars is the extended "Slow High groove: Smith sets the table just right for Priester and Morgan to sing in harmony, then puts on his own solo, a comfortable leisure suit of soul and funk.