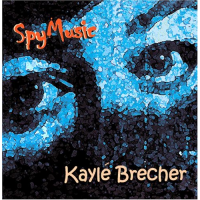 The remarkable Kaylé Brecher ranks among Philadelphia's finest jazz singers; nay, among the best the East has to offer. Over the past decade she has distinguished herself as a fearless interpreter of song, a subtle stylist with an instrumentalist's creativity. On this, her fourth album, she presents the best evidence yet that she is ready to burst onto the main stage of American jazz.

Spy Music is rife with the sort of creative wisdom that has characterized Brecher's work to date: the use of reduced instrumentation to emphasize the power of her vocals, a bold hand with song form and delivery that nods to such inspirations as Sheila Jordan and pianist Dave Burrell. In an era where the experimental artistry of singers like Lisa Sokolov confuses as many listeners as it enchants, Brecher's latest proves that serious creativity can still be the jazz singer's best asset.

Brecher declares her fence-smashing intentions right off the bat with "So Complicated, a dense and fascinating track for vocalist and saxophone quartet. Somewhat in the Rova mode, it becomes completely engaging as the singer wends her way between the jousting horns.

She includes some covers to balance out her sharp originals. In most interpretations Bernstein's "Cool tends to retain the old must of "West Side Story, but Brecher's version with a basic rhythm trio transcends the potential datedness of the tune. The venerable "Autumn Leaves is recast with appealing Latin percussion and harmonic alterations. Brecher's voice drifts along as gently and unpredictably as the leaves of which she sings. She even opts to cover herself. The engaging "Glad Bag was the leadoff tune of Choices, her 1994 debut. On the brilliant slower interpretation heard here, Brecher sounds more comfortable in her own skin. It's a different sort of gladness, tempered by maturity and a life more fully enjoyed.

One of the most distinctive tools in Brecher's kit has been her sometime use of minimal and unexpected accompaniment. As an example, Todd Groves' piccolo is a delightful feature of the upbeat "Under Paris Skies. On her 2000 release, Urban Objects, Brecher sang Neil Hefti's "Lil' Darlin' with tuba as her sole backing. Here she takes a similar path on tracks like "Power and the Glory, supported only by drums and occasional wafts of piccolo. This patriotic song by the late folkie Phil Ochs doesn't draw from the usual clichés; it presents the love of country with honest sophistication. The intros to "This Can't Be Love and "Old Coat are just vocals and upright bass, extremely effective in nailing down the initial mood. On "My World Is Empty Without You, Babe, baritone sax and drums provide the same sort of spare foundation. That Diana Ross hit is rendered in medley with Brecher's lovely original, "When You Were In My World.

Brecher's husband, pianist David Dzubinski, provides intuitive, loving interaction through most of the album. Musically, this is a marriage made in heaven. (Also recommended is Dzubinski's recent solo piano album, Recyclical.) The most distinctive sounds, of course, belong to the singer herself. On "Teardrops for Jimmy Brecher wraps the words around her very soul, giving a highly expressive interpretation of this comfortable waltz. Paul Klinefelter's distinctive bass work is a welcome complement.

The album offers two different takes on the original title track, "Spy Music. On both versions, the combined guitars of a session legend (Jef Lee Johnson) and a funk-soul genius (Ron Jennings) burn and offer tight support for the singer as they twist and turn through its complex yet engaging structure. Brecher is truly as gifted a writer as she is a vocalist, as this and her other originals attest. Apparently she couldn't decide between using a straight- ahead version or a more abstract second take by the same personnel, so she wisely chose to include the alternate at the end of the disc. The successfully realized differences in mood and structure testify to her marvelous ear.

Kaylé Brecher is, simply put, one of the most phenomenal voices in the realm of modern creative jazz. On Spy Music she is cast in her most impressive setting thus far. Highly recommended.

So Complicated; Cool; Spy Music; Teardrops for Jimmy; Under Paris Skies; Power and the Glory; Autumn Leaves; Glad Bag; This Can't Be Love; My World is Empty Without You/When You Were In My World; Old Coat; Spy Music (alternate).