By EYAL HAREUVENI
November 1, 2013
Sign in to view read count
This project is a labor of love. It began when guitarist Umut Çağlar, head of the Turkish avant-jazz label and musicians collective and band Konstrukt, found a new edition of a rare album documenting the musical meeting of American multi-instrumentalist Phil Musra with one of the forefathers of Turkish free jazz scene, drummer Hüseyin Ertunç (At Hüseyin's, Sagittarius A-Star, 2011, originally recorded in 1991). Çağlar suggested to the head of the small Italian label that reissued the album, Sagittarius A-Star, to listen to new material of his band and later to present a broader perspective on free music in Turkey. This project soon became a four vinyl boxset that reunites a few of the legendary improvisers of Turkey with a younger generation of improvisers. 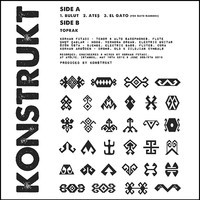 Konstrukt is now a quartet based in Istanbul, made up of Çağlar, saxophonist Korhan Futaci, drummer Korhan Argüden and bassist and percussionist Özün Usta. This band is well-versed with free jazz on both sides of the Atlantic and performed and recorded before with innovative sax players as Evan Parker (Live at Akbank Jazz Festival, Re:konstruKt, 2011), Peter Brötzmann (Doulany, Re:konstruKt, 2011, and Eklisia Sunday, Not Two, 2013)) and Marshall Allen (Vibrations of the Day, Re:konstruKt, 2011).

The quartet's approach is restless, anarchistic and energetic. The inventive thick sound of KonstruKt and its tight interplay blend vintage sounds produced from organ and moog synthesizer, traditional and ethnic percussion instruments with modern instruments, as if the Sun Ra Arkestra originated from the streets of Istanbul. "El Gato" (for Gato Barbieri) demonstrates beautifully the quartet approach. Saxophonist Korhan Futacı does not attempt to capture Barbieri's sound but its free and intense essence. "Torpak" features the quartet on a longer improvisation stressing its capability to move organically and creatively between the vintage space-age, psychedelic textures and modern, distorted sounds, West and East, and still have its own sound and uncompromising level of energy. 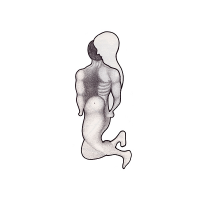 The second volume reunites three legends of the Turkish jazz. Percussionist Okay Temiz who returned to Turkey after more than thirty years of residence in Scandinavia, performing and recording with Don Cherry, South-African bassist Johnny Dyani and trumpeter Mongezi Feza, among countless others; pianist and multi-instrumentalist {Hüseyin Ertunç}} (who also painted the cover), who recorded with Konstrukt before, and bassist Doğan Doğusel, who played before with both Temiz and Ertunç, tough separately, and collaborated with KonstruKt.

The trio recorded two short improvisations in the studio and two longer ones recorded live in the Babylon club in Istanbul in May 2013. It is an intense and emotional meeting. In the studio all three burst with countless ideas, exchanging pulses, instruments and dynamics constantly, while solidifying the emphatic interplay. The first live improvisation features this trio, spiced with ethnic percussion instruments and flutes. The second live improvisation follows more clearly Cherry's pan-cultural MultiKulti visionary concept. It is a joyful and percolating, polyrhythmic tour-de-force demonstration by three masters who recognize no geographic borders or artistic conventions but the music itself, absolute, here and now. 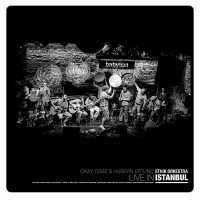 The third volume is the conclusion of the first two. A festive collaboration of the legendary trio of Temiz, Ertunç and Doğusel, the members of KonstruKt, augmented with other younger improvisers, recorded live in the Babylon club few days after the performance of The Trio.

The first piece is a playful and anarchistic collective improvisation of numerous reeds, woodwinds, percussion and string instruments, all gel organically into an intense fusion of fiery free jazz, emotional blues, polyrhthmic grooves and Turkish folk music, true to the vision of Cherry. The second collective improvisation marries a theme written by KonstruKt bassist Özün Usta with an traditional Turkish folk tune into a highly emotional celebration based on infectious, hypnotic groove, repeated again and again by the guitarists, reeds and woodwinds players, and percussionists till its chaotic climax. The first 26 copies of this limited-edition box set included also a one-sided vinyl album with two rehearsal pieces.