BY DAN BILAWSKY
November 1, 2013
Sign in to view read count 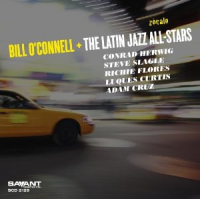 Latin jazz piano dynamo Bill O'Connell found a parallel between this gathering and Zócalo, the main plaza situated in the center of Mexico City; that square has long been a place where people meet to connect, celebrate and join together as one, and the same sense of togetherness and unity associated with that spot surrounds this recording.

O'Connell and his simpatico sextet mates sizzle, swoon and soar as they explore the art of creation through communication. Sometimes connections manifest themselves in simple and common ways, as when bassist Luques Curtis bolsters an O'Connell solo while drummer Adam Cruz pushes and prods, but sometimes the connections are more intense, though in a less obvious way. When trombonist Conrad Herwig colors behind saxophonist Steve Slagle during "For All We Know," for example, the respect and love that these artists have for one another—and for the music itself—is clear as can be.

When this band pushes the envelope and steps on the gas, as on the spirited re-write of "Joshua" and the fiesty "Nothing But The Truth," they create a powerful rhythmic undertow that can't help but suck in everything within earshot; the music is simply that powerful. Elsewhere, the material is poignant ("For All We Know), lighthearted ("The Surrey With The Fringe On Top") and luminescent ("Erik's Song").

O'Connell, Curtis, Cruz and conga player Richie Flores have a lot of chemistry and the horns really complement one another; Herwig's earthy trombone set against Slagle's focused alto or his piquant-to-pure soprano make for a winning combination. If the goal here was truly to let these folks share their musical thoughts and become one in the process, then mission accomplished for this fine group of musicians.

Big Sur; Joshua; Zócalo; For All We Know; Nothing But The Truth; 21st Century Blues; The Surrey With The Fringe On Top; Erik's Song; One Note Mambo.