By Sammy Stein
September 19, 2013
Sign in to view read count 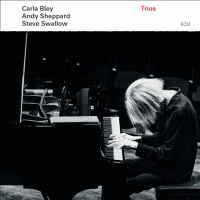 In Lugano, Switzerland in 2012, pianist Carla Bley, saxophonist Andy Sheppard and bassist Steve Swallow were recorded, and the result is Trios (EMC 2013). This CD is atmospheric and energised. Included are new versions of Bley's original "Utviklingssang" ( "Development Song"), "Vashkar" and the suites "Les Trois Lagons" , "Wildlife," and "The Girl Who Cried Champagne." It marks Bley's departure from the ECM distributed WATT label which has been her platform for the past 40 years, and her first recording for ECM itself.

"Utviklingssang" starts out with the simple, haunting melody played on guitar. This melody continues through the piece, being added to, developed and expanded by both Bley and Sheppard. Sheppard's emotive, sometimes breathy style of playing adds pathos to the haunting melody, one of Bley's best known works. "Utviklingssang" first appeared on the CD Social Studies (Watt 1981) and was reprised for her Duets album with Swallow (Watt 1988). Originally written for a large band, the track transfers well to a trio, and each musician gets to add their own take on the tune. Bley's precise playing contrasts beautifully with Sheppard's looser style. "Vashkar" is another of Bley's better known works and has been recorded by Paul Bley, Tony Williams, Cindy Blackman and others. Here the melody is established and repeated whilst all three musicians improvise around it. Sheppard is afforded extended solos in which he develops and extends the melody. Bley's exacting playing backs him all the way, before she takes a solo herself. "Les Trois Lagons" is based on cut- outs by artist Henri Matisse and was originally commissioned by the Grenoble Jazz Festival in 1996. The suites comprise three contrasting sections: the first section hears Sheppard, then Bley, gleefully improvising around the tune underpinned by the solid playing of Swallow. The second section starts with Bley's distinctive piano developing the theme, before Sheppard joins her and the mood changes to a more eclectic one, switching from light to dark, upbeat to sombre, with all three musicians adding musical sections over Bley's continuous chord sequences. Sheppard at one point imitates the root notes of the piano chords, making for an intimate feel between players before he and Bley diverge, eventually being joined by Swallow, who takes the mood upbeat for a while before ending it on a more contemplative note.

"Wildlife" is divided into sections titled, "Horn," "Paws Without Claws," and "Sex With Birds." Each section creates a different mood and uses the musicians differently, all underpinned by Bley's lead on piano. Swallow's playing is sensitive and he alters the tempo and atmosphere with consummate ease, with the other musicians following. The transition from "Horns" to "Paws" is made by Bley introducing a new riff over Sheppard's fading riff from the first section, making a seamless transition. "Paws" gives Sheppard the chance to solo and use the full range of his soprano—which he does—while Bley backs with solid, emotive piano. This time Bley takes the transition into "The Girl Who Cried Champagne," divided into parts 1, 2 and 3. Each part offers the listener a different atmosphere and mood. Part 1 takes the familiar tune and allows the musicians to improvise, play and develop it. The beautiful, gentle middle section is dominated by Bley's sensitive playing. Part 3 is introduced by Bley, before being taken up by Sheppard, and offers all three musicians to add their distinctive touches to round off the CD. The production of this CD adds to its effectiveness. Every breath, every twang and the tiniest sound can be heard from all three musicians, recreating the essence of live playing. Sheppard at times has a breathy style of playing but this somehow adds to the atmosphere evoked in this music. This is a CD that grows and develops with every listen.

Each time it is played, you hear more, feel more and get more of the atmosphere created by the act of these superb musicians coming together. Sheppard in particular demonstrates slight shifts of mood, tiny changes in volume and nuances in his playing, all of which take several plays before you fully realise how much there is to his understanding of the music. Some of the tunes are familiar as Bley has recorded them before, but here they are given a new life, energy and subtle changes of interpretation. The communication between players and intensity of the musicians is clear. Simply put, this is great music, well played.