Free Nelson Mandoomjazz is not exactly your posterchild for traditional jazz trios, nominally comprised of wind player John Coltrane did not in his sacred, noisy final period (Ascension (Impulse!, 1966) through Expression (Impulse!, 1967)). For his part, bassist Stewart squeezes his Fender bass through a compression approximating a Rickenbacker bad on the whiskey, chording broadly, making as much sensible noise as possible.

The band hits a blues grove on "LORA," with the addition of Trumpeter Luc Klein and trombonist Patrick Darley. A horn triptych is forged, giving the disc its most authentic jazz (if there is such a thing with a moving target). "Bicycle Day" begins with a signature, lumbering Black Sabbath bass line from the edge foreboding gloom and doom, dragging Sneddon's tenor saxophone with him. The overall song structure is dirge-like, as is the atmosphere created. That said, this music cannot be beat and there is no one else making it at this level.

The Organic Trio is NOLA guitarist Brian Seeger, French organist Jean-Yves Jung, and Luxembourger drummer Paul Wiltgen. This international line-up has been receiving international attention since the release of Home Remembered (Jazz Family, 2013). This is not your average, run-of-the-chitlin'-circuit greasy fare. This is more sophisticated and refined. That is not to say that the music does not swing it does. But the band readily knows when to kick things in. On the opening "Johnny Young," the piece gets its proper multi-rhythmic introduction before spreading out into a broad 4/4. Then time signatures go out the window on "But When Do We Eat."

"Vum Land" proves an earthy feast, propelled by Seeger's slow and thoughtful guitar. The introduction is very American, with roots in all of Americana: blues, gospel, country, western: a well-established theme. Seeger's feature here allows the listener to hear what is on the other side of jazz. The title piece features some swift post-bop drumming from Wiltgen, juxtaposed against a delicate melody line established by Seeger and Jung. Just when one thinks they are going to get through an organ jazz offering without the blues, the band sneaks in the very clever "Organ Donor." What might be a boogaloo, the song presents and extended figure as head with seasoned with solos throughout.

The closing "Buffalo Trace" is a stark departure from the rest of the disc, setting up a long and wide area to explore, again, melodies of Americana. Seeger presents his motif carefully, allowing it to emerge naturally, while fed by Jung's soft chording and Witlgen's sensitive percussion. If the standard organ jazz offerings are just too, cliché, Organic Trio offers a provocative alternative that expands well beyond the soul jazz realm.

Ben Rosenblum
Instead
One Trick Dog
2016

Long ago, the romantic paradigm of the hard-scrabbled, autodidact jazz musician living in a cold-water Harlem flat, playing the heyday of 52nd Street has been replaced my the pristinely-prepared, conservatoire-trained technical wizard mounting the concert stage, performing the standards like a classical piece and offering original compositions that span the genre spectrum and beyond. This new paradigm often results in sterile music delivered with a dull precision. "Sure, the player has chops. But why does he or she sound like a mere technician?" What is it that is lacking in note perfect playing? Humanity, that's what.

However, there do emerge conservatoire aces with grit in their imaginations and a facility to express such in their playing. Ben Rosenblum is one such performer/composer. The Julliard-Columbia trained pianist brings a freighter of technique to the keyboard, while still maintaining enough earthiness in his playing to satisfy even the fussiest listener. On his debut recording, the precociously young musician treats us to an even dozen (including the cleverly hidden "Summertime" bonus track. Rosenblum incorporates the percussive nature of a Don Pullen -Cecil Taylor with the melodic finesse of a Gene Harris -Alan Broadbent. He winds these considerable influences in with his own impressive talent completely supported by drummer Billy Hart and bassist Curtis Lundy. That is heady company for a debut, but certainly more than warranted considering the music produced. Highlights include a top-shelf interpretation of Sonny Clark's "Nica," and Duke Ellington's "Single Petal of a Rose." It will be interesting to hear this young talent take a hard turn into something very new. 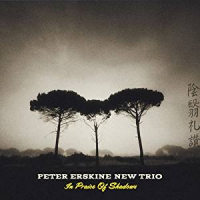 Peter Erskine New Trio
In Praise of Shadows
Self Produced
2017

Drummer Peter Erskine has his thumb in a lot of creative pies. In Praise of Shadows, the follow up to his Peter Erskine New Trio debut Joy Luck (Fuzzy Music, 2011) was released the same day as his latest Dr. UM project, Second Opinion (Fuzzy Music, 2016). The New Trio features, in addition to Erskine, bassist (and nephew) Damian Erskine and keyboardist Vardan Ovsepian. The personnel is rounded out by guests cellist Artyom Manukyan and EVI maestro Judd Miller.

Cleverly programmed, the ten-piece recital includes a Japanese classic pop hit "Sukiyaki" and a well-known Mexican ballad "Marcheta."' All compositions are delivered with a potent three-punch assault from the trio principles. Erskine is undoubtedly the leader, his drumming looming large. That does not mean there is no room for the others. "Each Breath" features bass and piano prominently in a hook-melody rhythm that is infectious. 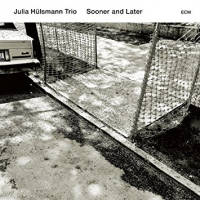 An ECM darling if there ever was on, pianist Julia Hulsmann has a sound Manfred Eicher dreams about. Paring her format back to a trio from her recent outing with Theo Bleckmann on A Clear Midnight—Kurt Weill and America (ECM, 2015), Hülsmann distills the jazz piano trio to its naked essence and, in doing so, bears the bones that make the fire in the music. Nuanced and calculated, Sooner or Later highlights trio interplay that, in the most justified cliché, approaches that of early '60s Bill Evans.

Most impressive are the sonics. All instruments are mixed in a well-balanced solution of grace and quiet. The music is consonant and well-conceived. Delightful to the point of celebrating is drummer Heinrich Köbberling's spider-web brush work, and bassist Marc Muellbauer's precise playing, in support or solo. It is hard to ding fault with such a superb performance. Hülsmann has a potent and endless imagination for melody and never forgets that is why she is there...playing.