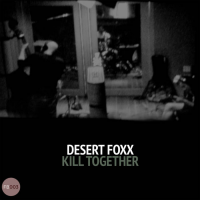 There's music intended to be pleasant or listenable—probably most of it out there, all told—and then there's the kind that's more about provoking or challenging the person who's listening. The more abstract something is, the harder it can be to discern just what the purpose or message is, and a brief fifteen-minute recording can only give so much of a hint. Nonetheless, the Brooklyn-based trio Desert Foxx paints a couple preliminary pictures with Kill Together to poke at the ears and unsettle the mind.

Much of the EP is based around ringing guitar that's a bit too busy for drone and distorted enough to be uncomfortable if it's too loud. Balanced against that are a couple quiet sparse passages with soft background piano and vague synth sounds to suggest a desolate empty landscape. There's almost a narrative flow to the overall sequence, which starts out loudest at the front end, then settles into lower and slower rumblings as they flow along.

The middle track finds an odd complement between some almost-peaceful piano notes and the unsettled echoes of the guitar, then quickly buries any lighter feel under some crashing dramatic drums. It's the uneasy part that wins out in the end, as the finale's cloud of decaying echoes fades into a lingering haze of smoke. Desert Foxx does indeed transport you to a desert of their own making, and it's one that feels like a post-apocalyptic wasteland—usually harsh and always intense.

For Giants; Bring Us Home; Where We Burn the Bodies.