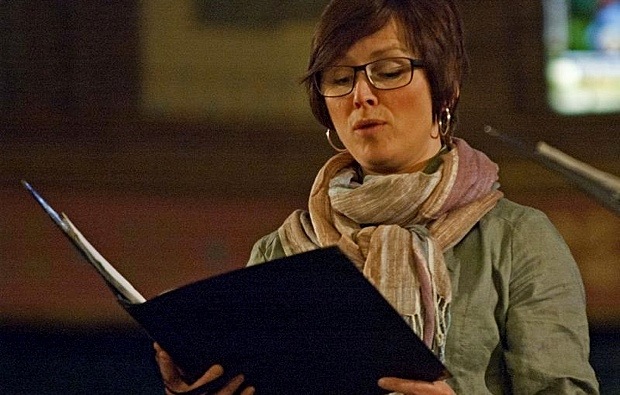 By JOHN KELMAN
March 29, 2011
Sign in to view read count
Trio Mediaeval with The Toronto Consort
St. Anne's Anglican Church
Toronto, Canada
March 23, 2011
When there's the kind of chemistry that Trio Mediaeval has sharpened over the past decade, the loss of one of its singers—even if temporary—could be a recipe for, if not disaster, then, at least, a significant shift in its internal dynamics. With Anna Maria Friman on temporary hiatus, following the birth of twins last summer, the remaining vocalists—founder Linn Andrea Fuglseth and Torun Østrem Ossum—were faced with a difficult decision, when it came time to support the release of A Worcester Ladymass (ECM, 2011) in North America. To tour, or not to tour?
Fortunately for the group, and for the nearly packed house at St. Anne's Anglican Church, in Toronto, Canada, on March 23, 2011, Trio Mediaeval was able to recruit Berit Opheim Versto, whose own career as a Norwegian folk singer made her an ideal choice, especially for a performance that devoted nearly its entire second half to music from Folk Songs (ECM, 2007), the trio's sole departure, amidst its five-album discography, from a general predilection for sacred music across the centuries. There's no question that Trio Mediaeval's normally empathic passing of melody amongst its singers—seamlessly changing roles like the most well-honed tag-team—was diluted by the recruitment of a temporary replacement, with less history and less inherent chemistry; but by carefully selecting material from the two albums that constituted the bulk of Trio Mediaeval's two-hour performance, only those most familiar with the Trio and its repertoire would have noticed the difference.

The performance—whose strong attendance was all the more surprising, given the blast of winter and attendant heavy snowfall that hit earlier in the day, bringing traffic to a standstill throughout much of the city—was also a first for Trio Mediaeval and for those already familiar with the group's sublime magic. In addition to a first set, that included seven pieces from A Worcester Ladymass, including contemporary composer Gavin Bryars' "Credo," one of the album's darker, more structurally developed pieces, the trio also collaborated with The Toronto Consort, a group focusing on renaissance and baroque music, for the world premier of "Breathe," by Toronto-based composer James Rolf. As well-honed as this piece was, its attempts to bridge music of antiquity with more contemporary concerns—both instrumentally and in its adaptation of texts dating from the Middle Ages' Hildegard von Bingen to more contemporary prose from Toronto-based playwright/librettist Anna Chatterton—was only partially successful. Perhaps, beyond the context of the rest of the evening's music, it would have been more successful, but amidst the simple monophony and gently interweaving polyphony of Trio Mediaeval's repertoire, its dissonant elements, more blatantly climactic evolution, and greater complexity, simply felt out of place. Trio Mediaeval's music somehow transcends time; "Breathe," unfortunately, was very much of its time.

Still, it provided an intriguing contrast, and a fundamental shift from the sacred music of the first half of Trio Mediaeval's show to the second, where The Toronto Consort opened with a brief instrumental set, culling Italian and French music from the 13th and 14th Centuries, and performed by a quartet featuring the Swedish Nyckelharpa (a bowed instrument where depressed keys serve as frets), its distant cousin, the hurdy-gurdy, recorder and lute. In a time where there is so much noise as a background to daily life, the grace and elegance of this music served as a calming transition for the return of Trio Mediaeval to the hall. 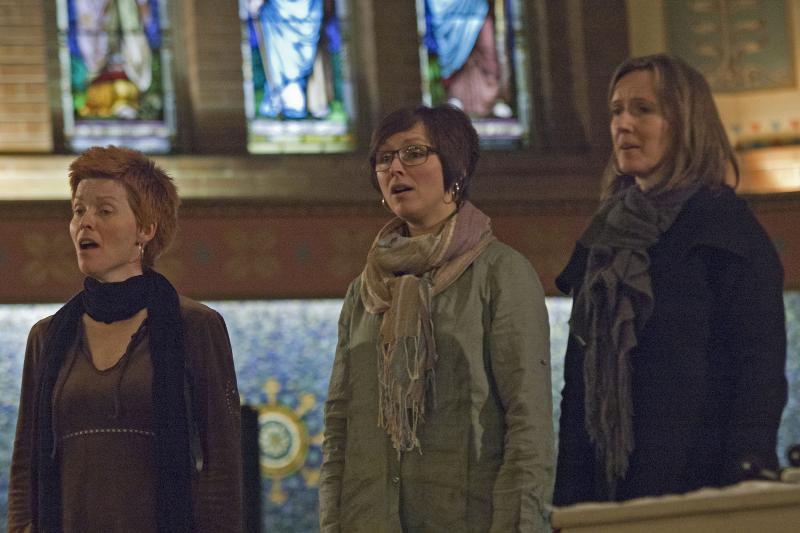 Versto may not have been able to "drop in" to her trio mates' intrinsic chemistry, but her comfort in the Norwegian folk tradition was clear throughout the Trio's performance of seven pieces from Folk Songs, and one new piece, the concluding "Fryd dig, du Kristi brud," arranged for the Trio (as was the case with much of this music), by Fuglseth. With each member of the trio at a different location throughout the massive cathedral, they began the set with "Till, till Tove," a clarion call for the audience's attention. Walking slowly towards the pulpit, the Trio made use of the hall's wonderful acoustics, a softer version than on record, where percussionist Birger Mistereggen gave the song more propulsive thrust, though the pulse created by the Trio's voices were anything but insistent. The Trio also used its melody chimes, here and during the Ladymass material, to create resonant harmonies, over which they could layer their voices.

Focusing on material that didn't specifically feature Friman, the Trio retained its signature vocal purity, an ability to coalesce from intertwining lines to absolutely precise unison; three voices, truly becoming one. All three singers possessed tremendous control, the kind that didn't rely on vibrato or melisma to impress; instead, their biggest strength, even with this altered incarnation, was in their ability to interpret with finesse and create power with the gentlest delivery, all the while employing shifting dynamics with unfailing and uncanny synchronicity. At one point during the set, the Trio came together as a triangle, backs-to-backs, with Ossum facing the audience and singing the melody, while behind her, Fuglseth and Versto created a unison drone between them, one that surely relied on their physical proximity, allowing them to feel each other reaching the end of breath, to ensure that new ones were taken at different times in order to keep the pedal tone consistent and seamless.

Members of The Toronto Consort joined the Trio at the end of the performance, adding another gentle layer of support, but during this cold, snow-filled evening in Toronto, all eyes were truly on Linn Andrea Fuglseth, Torun Østrem Ossum and Berit Opheim Versto, who collectively delivered an evening that few of their clearly appreciative audience members will soon forget.