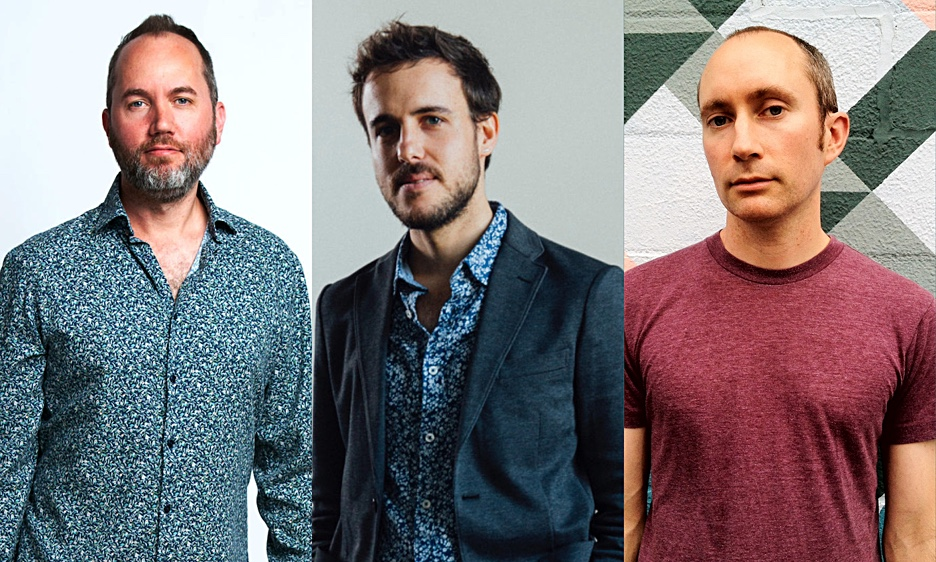 Set in the rolling drumlins of County Down with farmland rising and falling on all sides, a couple of weathered donkeys looking on and the Mourne Mountains rising majestically ahead, Magy's Farm, it is safe to say, is not quite what New York jazz musicians envisage when they come to play in Ireland. From a distance the venue looks like just another farm outhouse—a white pebble pressed into the green and purple landscape.

For Trio Grande, aka Will Vinson, Gilad Hekselman and Nate Wood, Magy's Farm is likely one of the more singular venues encountered on its fifteen-date European tour —the trio's first serious road venture since releasing its eponymous debut in early 2020.

Seating forty, including a small gallery for ten tops, the floor is the stage, a small but adequate area for musicians. Its intimacy is such that front rowers at Magy's Farm gigs can occasionally experience the informal baptism of musicians' spray from trombones or saxophones. In certain ways, the space is like a throwback to the small, rural Irish churches of centuries past, those rudimentary, spiritual beacons for the faithful.

On this pitch-black night, with fog reducing visibility on the rough ribbons of country roads—an absolute rabbit warren of a system—to a handful of metres, a sat nav was a handy tool for any first-time visitors. Though as all roads in these parts seemingly lead to every other road, a mazy journey was practically guaranteed. The faith of this Monday-night jazz congregation, however, was amply rewarded by Vinson, Hekselman and Wood's outstanding performance.

Trio Grande's debut album provided the bulk of the evening's tunes, though it was Hekselman's folksy "Long Way From Home," the opening track from Far Star (2022) his tenth album as leader—and first on Edition Records—that opened the set.

While Vinson comped on electric keys and Wood simultaneously juggled a skittering brushes groove with his right hand and a pulsing electric bass rhythm with his left, Hekselman unveiled the sort of finely sculpted solo, melodious yet adventurous, that is his stock in trade. At times you could feel his John Scofield influence, but Hekselman's largely personal approach to his instrument singles him out as one of the most arresting of post-Kurt Rosenwinkel guitarists. Vinson, a modernist in the lineage of Greg Osby and Chris Potter, then switched to alto saxophone and responded with a solo that grew gradually and seductively in impetus.

A highlight of Trio Grande's set came with Hekselman's joyous tribute to his son, "Elli Yeled Tov"—imagine Stevie Wonder's '70s band doing a calypso and you would not be too far off. Built around an infectious looped guitar melody, played initially by the guitarist and Vinson in unison, the trio spun a sunny weave of overlapping lines and melodic call-and-response for ten minutes, fully twice the album version's length. Hekselman tapped his pedal board to conjure a skewed, steel-drum-esque tone in a scintillating intervention, though pick of the solo spots was Wood's dextrous kit-groove-cum-bass solo, which was truly something to behold.

Wood has stepped into the hefty shoes vacated by original Trio Grande sticks-man Antonio Sanchez, but the Kneebody multi-instrumentalist brings not just his own sizeable personality to the music—one that feeds from rock as much as jazz—but an added rhythmic dimension to boot. And if Trio Grande ever needs a second guitarist then Wood can take on that role too, as he used to do in Taylor Hawkins' Coattail Riders.

A brace of contrasting tunes by Vinson followed. The slower-paced "Oberkampf" married melodic lines with a guitar-led rock ostinato to powerful effect, while the knotty funk of "Resting Jazz Face" from Tripwire (Whirlwind Recordings, 2022) featured terrific solos from Vinson and the remarkable Wood, whose groove never wavered in a flurry of polyrhythms. The trio lowered the temperature on "Will You Let It?," a delicate ballad of bluesy hue in which Hekselman and Vinson dovetailed tenderly.

The temporary reverie was shattered by a thunderous drum-and-bass intro that launched a searing slice of jazz-fusion for the 21st century. With Wood feverishly stoking the trio's boiler, Hekselman and Vinson both stretched out in grand style before reuniting on the jaunty head. This may have been a new number as another Trio Grande album is in the works, the musicians having spent the day before in Dublin's Camden Studio.

There being no point in stepping outside into the cold just to re-enter for an encore, the trio dispensed with the formality in good humor and signed off with a gorgeously understated interpretation of John Lennon's "Jealous Guy." Caressing the melody faithfully, the trio only took wings in the thrilling home stretch.

A little earlier, Hekselman had paid tribute to Magy's Farm founders and proprietors, Maggie Doyle, a former BBC Radio Ulster programme editor, and her husband, Linley Hamilton, trumpeter, BBC Radio Ulster presenter, educator and indefatigable jazz advocate. "The world needs people like you that make something out of nothing. It's much appreciated," Hekselman offered graciously. Well, ditto Vinson, Hekselman and Wood—much appreciated by all.