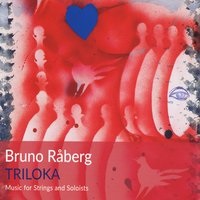 Sweden boasts a long tradition of producing notable double bassists—Georg Riedel, Palle Danielsson, Anders Jormin, Lars Danielsson, Dan Berglund and Petter Eldh all spring to mind. Bruno Råberg is another whose virtuosity and lyricism have propelled him to international renown, as a collaborator with some of jazz's most eminent names, and, since 1986, as a Professor at Berklee College of Music. As a leader on his Orbis Music label, Råberg has shifted from quartet (Ascensio 2003) and nonet settings (Chrysalis, 2004) to the avant-garde duo with Phil Grenadier, Plunge (2012), and the spacious, atmospheric For the Unknown (2016) -the latter two of which employed post-production techniques and electronic sound design.

Råberg is equally adventurous in the realms of improvised and composed music and Triloka embraces both with gusto. In a radically new setting for the bassist, Råberg leads an all-string ensemble through contemporary classical terrain where jazz improvisation and strong folkloric colors—notably from India—course through music that is soothing and uplifting. Four violins, three cellos, a brace of violas, harp and an additional acoustic bass blend in tightly orchestrated arrangements that, nevertheless, leave plenty of space for individual expression.

The melodic ideas resurface in part two, as do similar rhythmic patterns to those heard in "Triloka—Three Realms"—this continuity creating a suite-like effect. Block and Thomas are once more featured to good effect, while Charles Overton's harp swells the strings' chorus in an underlying pizzicato waltz. The two-minute vignette "Wave Play (Vagspel)" evokes the lulling rhythm of slowly lapping waves and serves as something of a palette cleanser before the intricate yet lyrical contours of the episodic "Sojourn for Strings," which features violinist Layth Sidiq, whose sinuous lines convey something of the melodic charms of songs from his native Jordan.

The three-part "Trilogy for Strings" begins with the sombre impressionism of "Part I -The Clearing," led by cellist Naseem Alatrash's understated improvisation; pizzicato pulse and probing bass usher in greater momentum on "Part II -The Departure," while the ensemble moves swiftly up a gear on "Part III -The Meeting," urgent riffing underpinning a series of hypnotic interconnecting solos. Råberg steps into the spotlight on the sweetly lyrical "August Hymnal," the bassist's rootsy, Charlie Haden-esque solo and the ensemble's subtle rhythmic impetus are entirely at the service of the tune's mellifluous flow.

One of in Råberg's most personal statements to date, Triloka's many charms reside equally in Råberg's compositional élan—the deft weaving of multiple voices through the prism of classical and folkloric pastures—and the individual freedoms that permeate this contemporary, yet timeless sounding music. Never less than compelling.