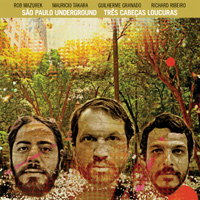 Três Cabeças Loucuras (Portuguese for "three crazy heads") is the third release from São Paulo Underground to explore the furthest fringes of Brazil's revolutionary Tropicalia movement. Updating the renowned genre's patented psychedelia with free improvisation, laptop-driven electronica and musique concrete, the album unveils a spectrum of kaleidoscopic sound that pushes the bounds of each style to its limits, creating a new, unclassifiable amalgam in the process.

The record's prevailing mood is one of celebratory innovation and bold experimentation. Blurring the line between electronic abstraction and acoustic formalism, "Carambola" is indicative of the ensemble's unfettered creativity; supported by understated percussion, the coruscating timbres of the cavaquinho (Brazilian guitar), reverb-laden brass and overdriven keyboards weave harmonious counterpoint into a new fusion of rural and urban tonalities. Underscored by an infectious polyrhythmic shuffle, "Jagoda's Dream" features some of Mazurek's most striking cornet work, while the celestial balladry of "Colibri" spotlights his mellifluous lyricism. Guest vibraphonist Jason Adasiewicz and drummer John Herndon lend their estimable talents to the iridescent anthem "Just Lovin'" and the brooding "Six Six Eight," which also includes Matthew Lux on electric bass guitar. The latter number extends the post rock ambience of Herndon's primary band, Tortoise, into a roiling bitches' brew of polyphonic furor.

Brazil's Tropicalisimo movement has come a long way since the seminal efforts of Caetano Veloso and Gilberto Gil. Sired by the inspired verve of like-minded souls, Três Cabeças Loucuras is more than just a jazz-based extrapolation of a venerable form—it's a fascinating new hybrid.