BY BRUCE LINDSAY
October 5, 2015
Sign in to view read count 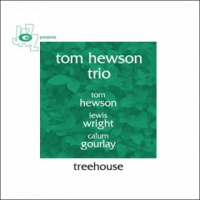 Treehouse, album number two from the young British pianist Tom Hewson, finds him working in a trio (which is also known as Treehouse) alongside two more of the brightest young players on the UK jazz scene—bassist Calum Gourlay and vibes player Lewis Wright. It's a lyrical and engaging collection—mostly of Hewson's own compositions—with the relatively rare pairing of piano and vibes giving the music an added frisson of interest.

Hewson's debut, Slightly Peculiar (Self Produced, 2012), was a solo album noteworthy for its bucolic calm and the influence of Bill Evans and Olivier Messiaen. Treehouse is a brighter affair, the addition of vibes and bass giving the tunes added urgency while the compositions themselves conjure up more of an urban feel (as in built-up areas, not hip-hop or rap). There's still the breadth of styles and influences that characterised the debut and made it such an appealing collection.

This time round, Hewson says that the music brings together some more key influences—Ravel and Debussy as well as Evans, plus Paul Bley, bebop, Oscar Peterson and John Taylor. The slow and beautiful "Gelsomina" is probably closest to Bill Evans Trio territory—Gourlay's considered and spacious bass playing is especially delightful.

"Glitch" is a sprightly and humorous number that eventually breaks into bebop and in so doing presents the album's most straight-ahead few minutes. Gourlay keeps things centered round his walking bass line, piano and vibes each solo inventively. Wright's "Silver Strands" is the most delicate of the longer tunes, a feature for his softer-toned vibes sound and a showcase for the way in which he and Hewson can interweave their instrumental lines so subtly. "Beanie's Bounce" is another up-tempo tune, with Hewson slipping between boogie, bop and Ravel-ish classical phrases. Just to add to the mix, it's the tune where Wright's vibes come closest to betraying the Frank Zappa influence claimed by the press release—think "200 Motels," if only fleetingly.

Three tunes, barely 60 seconds each, are solo pieces. "Lifting" is Wright's contribution—a crystalline opening gives way to a softer tone before the piece ends (although it doesn't seem to resolve), drawing forth memories of some of the weirder children's programmes of decades past."Splitting" is Hewson's tune, a skittish, jumpy 74 seconds that does indeed sound like it's about to split. Gourlay gives us "Lingering," the shortest of the three—a dark, dense, arco piece.