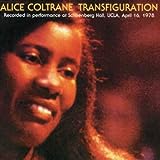 Following the death of her husband in '67, Alice Coltrane steadily recorded an album a year up until Transfiguration in 1978, a live session which consequently represents the culmination of her spiritual music via recordings and, for the most part, public appearances as well. After her first seven sessions through the late ‘60s and early '70s for Impulse!, Ms. Coltrane began recording for Warner in '75 around the time she founded a center for Eastern religious studies.

The apex of that handful of sessions, Transfiguration features John Coltrane associates, bassist Reggie Workman (who appears on an earlier session, World Galaxy) and Roy Haynes on drums. "No finer people to let you feel what this force is really about," the leader matter of factly states in her introductions.

The recording revisits many of her intense spiri-tual music sentiments via densely rhythmic, textural, and colorful modal work. Her Detroit church organist experience is on full display from the beginning. If she performed at this level in her church back in the '50s, it certainly would have appropriately foreshadowed perhaps the hippest of churches, the Saint John Coltrane African Orthodox Church in San Francisco that speaks to a higher consciousness through the music and spirit of Trane himself. The title track finds the leader's modal morning-raga single notes complemented by Haynes' marvelous cymbal work and percussive chimes and bells, and Workman's appropriately moody arco bass. The three flow together with resonating bass plucks inciting snare and machine-gun drum rolls. Ms. Coltrane then hits a personal groove reminiscent of latter-day John Coltrane just over halfway into the piece with legato effects initiating a relentless Haynes' swing. Moving over to the acoustic piano for "One For The Father” (dedicated to John Coltrane), she beautifully performs an interesting twist on the spiri-tual "Go Down Moses". An entrancing and momentum -building nine-member string section, featuring the late violinist Noel Pointer, complements her harp treatment of the piano during another original, "Prema".

The hymnal opening of the near 40-minute two-part "Leo" suite, in a blink, morphs into a bundle of sheer raw force. Relentlessly conjuring up meters and rhythms without hesitation, the trio collectively works to fill all potential spaces of rest. An unfortunately faded out unaccompanied bass solo (as was the case with the original vinyl) leads into the second part of "Leo" finding Haynes as nonpareil soloist. You can't help but wonder why he has gone unrecorded as an unaccompanied percussionist to this very day. As one of the living masters, Haynes has played in most possible surroundings with a who's-who of jazz histo-ry. Alice Coltrane reenters, her frenetic organ playing and sound sheets of momentum recalling Cecil Taylor and more recently guitarist Dom Minasi. Working the organ again like a harp in her hands, from top to bot-tom and not a key untouched or underutilized, the mountain of momentum naturally spills into the finale, washing ashore into thunderous applause.

This review first appeared in the June 2002 issue of All About Jazz: New York .