By Jack Bowers
December 6, 2019
Sign in to view read count 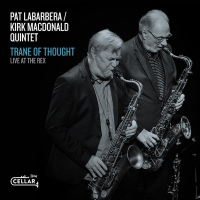 Sometimes the name of an album can be a dead giveaway. Clearly, tenors Pat La Barbera and Kirk MacDonald, the co-leaders of this admirable quintet from north of the border, are enthusiastic admirers and champions of the late great saxophonist John Coltrane. Disciples, yes, but leagues away from slavish imitators. LaBarbera and MacDonald have strong and vibrant voices of their own, which come through loud and clear on Trane of Thought, an exemplary and well-received concert date recorded at the Rex Jazz & Blues Bar in Toronto.

Even so, this is after all a tribute to Coltrane and his massive influence on generations of jazz musicians, saxophonists or no, and all but one of the half-dozen selections were written by the honoree himself (the exception is Tadd Dameron's silky-smooth curtain-raiser, "On a Misty Night," which Coltrane recorded with Dameron in 1956). "Misty Night" is followed by the enticing "Village Blues," the first song recorded by the quartet of Coltrane, pianist McCoy Tyner, bassist Steve Davis and drummer Elvin Jones. While paring down their vast Coltrane-related library (more than 130 songs) to six was no easy task, LaBarbera and MacDonald chose themes from various periods in Coltane's career, and pieces ranging from familiar to lesser-known.

As it turns out, everything on the bill of fare is for the most part straight-ahead and linear, the finale perhaps a touch more free-wheeling, consisting as it does of "Acknowledgement / Resolution," Movements 1 and 2 from "A Love Supreme" (the recording of which by Coltrane's quartet was released in 1965, two years before his passing). LaBarbera solos on "Acknowledgement," MacDonald on "Resolution." For purposes of clarity, the solo order on each track is provided on the album jacket. Whatever the context, LaBarbera and MacDonald are decisively on top of their game, but no more so than the group's superlative rhythm section, in which a second LaBarbera—drummer Joe—keeps his usual flawless time, ably chaperoned by bassist Neil Swainson and pianist Brian Dickinson. Each of them takes his solo shots as well, and none is found wanting in that quarter. Joe LaBarbera is especially impressive on Coltrane's boppish flag-waver, "26-2," Swainson on the charming ballad "Naima" (wondrously prefaced by the unaccompanied tenors), Dickinson whenever the opportunity presents itself.

This is a heartfelt tribute that puts its best foot forward from the outset and never once loses its balance. LaBarbera and MacDonald have immersed themselves in the music of Coltrane, an ardor that is perceptible in every note they play. They and their teammates have put it all together on Trane of Thought, one of the more impressive small-group sessions to saunter into this neighborhood in quite some time.