BY DAVID ADLER
February 1, 2001
Sign in to view read count 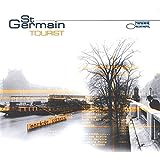 The attempt to blur and redefine genres by combining techno and jazz began roughly 10 years ago, and French DJ St. Germain (aka Ludovic Navarre) has become one of the more celebrated practitioners of the very young art form. A risk that goes with this territory is that in the hope of pleasing techno and jazz fans, one may simply alienate both. Thus was the music on Tourist recently dismissed in the Village Voice as "NPR techno." Presumably, for someone who likes their techno louder and harder, St. Germain's use of improvising instruments ' flutes and electric pianos and such ' will come across as easy listening filigree that your mom would like. Diehard jazzers, on the other hand, tend to issue knee-jerk denunciations of electronic music, viewing it as necessarily inorganic, unhip, commercial, a threat to the acoustic music they know and love. While St. Germain may have sold over 200,000 copies of his 1995 effort, Boulevard, and while Tourist may be getting its share of critical praise, this is a style that will probably remain controversial for some time.

St. Germain surrounds his beats and samples with performances by live musicians, even getting the fine Jamaican guitarist Ernest Ranglin to contribute some licks on "Montego Bay Spleen." Each of these tracks has something distinctive about it: the Marlena Shaw snippet that's sampled throughout "Rose Rouge," the John Lee Hooker guitar and voice samples on "Sure Thing," the catchy flute riff that kicks off the aptly titled "So Flute." The smooth, textural grooves of "Latin Note" and "La Goutte D'Or" are hypnotic and cool. Some may consider this album groundbreaking, some may hear it simply as chic background music. But jazzers, don't let the electronic stuff prejudice you. St. Germain is making music from the heart.